‘They Do’ Pride Commitment Ceremony [photos] 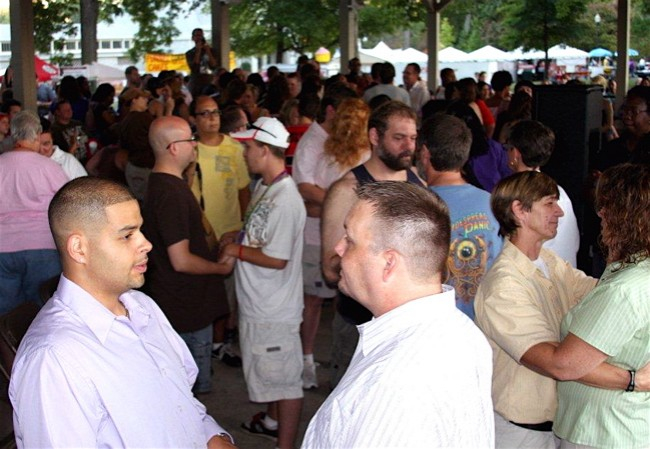 Some 50 same-sex couples clasped hands and made vows at Atlanta Pride’s annual Mass Commitment Ceremony on Oct. 9. The symbolic joinings took place in the Piedmont Park Pavilion during the festival.

The non-denominational ceremony was affirmed with words of wisdom from Rabbi Joshua Lesser of Congregation Bet Haverim and Rev. Josh Noblitt of St. Mark United Methodist Church, among several other clergy.

Like LGBT Atlanta itself, the diversity among the participants was as clear as their shared mission to tie the knot with the ones they love.

The “come-as-you-are” atmosphere meant traditional tuxedos and gowns, but it also drew couples in kilts, shorts, t-shirts and with no shirts at all. Some couples brought entourages dressed to the nines with flowers and gifts, while others drew sweaty spectators toting cans of beer.

Whatever they chose to wear or bring, and whoever they chose to share it with, the pairs clasped hands and promised their hearts to each other, some with self-written vows, others with tears, and still more with laughter, hugs and kisses.

“The opportunity to pledge their commitment to each other publicly before friends and family is an important part of the festival,” says Atlanta Pride Executive Director JP Sheffield.