These gay Atlanta boys want you to Respect the Brunch 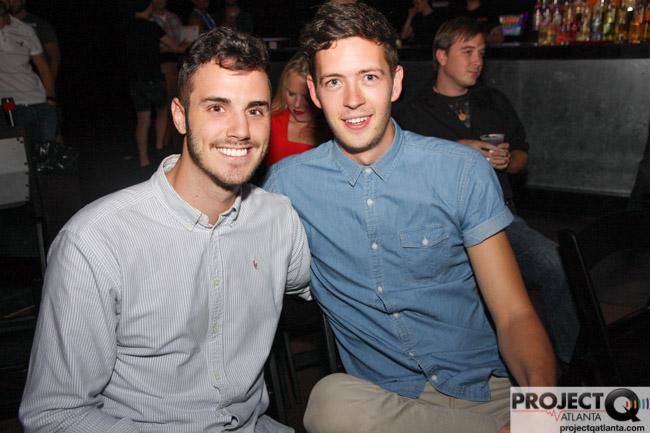 It can be oh so tedious to squeeze do-gooding into your busy social calendar. Not anymore. Two local boys are reviving mass gay brunch so you don’t have to shift your Sunday Funday plans to donate to a worthy cause.

“Brunch is not a time of day. It is a state of mind,” Nick Pasquariello (photo, left) told his straight roommate as he and boyfriend Alex James (right) headed out the door for a recent 3 p.m. Sunday meal. “Respect the Brunch.”

The phrase that became an instant inside joke for the couple and their friends is now Respect the Brunch, a recurring benefit for Lost N Found Youth that debuts on Sunday at Ten Atlanta. Pasquariello and James are your hosts at the big gay meal, which they envision as a regular thing every four to six weeks at different restaurants around Midtown. Sunday’s debut has already garnered more than 100 guests, but there’s plenty of room on the invite for you.

“In short, the idea grew from a group of people that take brunch very seriously and want to channel a communal passion into something that benefits others,” Pasquariello tells Project Q, “[We hope] that this becomes an event you look forward to, an event that brings the community together to have a good time and support the less fortunate.

“Alex moved over from Australia with the sad perception that being gay was a trial that you have to endure throughout your whole life,” he adds. “He was quickly embraced by a community that accepted him as well as themselves and his enjoyment of life went from ‘in spite of of being gay’ to 'because of being gay.’ Atlanta opened his eyes … Respect the Brunch is a community brunching together for the people that don’t have a community like this.”

The guys were particularly drawn to Atlanta’s fight against LGBT youth homelessness by Lost N Found, he adds. That makes Respect the Brunch perfectly timed with a trio of events during LNF Weekend. The organization supporting local gay and trans teens on the street holds an emotional outdoor Lost N Found 48-hour vigil drive for food and clothing Friday through Sunday in the Burkhart’s parking lot. The weekend also includes an LNF community meeting and candlelight service on Saturday. Then after you brunch on Sunday, get a disco nap and hit Burkhart’s for the weekly Armorettes LNF Closing Party show and fundraiser.

Respect the Brunch envisions its future as a fundraising vehicle for organizations that "propel LGBT empowerment and acceptance,” Pasquariello says. Beyond that, “it’s gonna be the place to be. Ten will donate a healthy portion of your check to a local LGBT charity that are doing awesome work for our community. It’s gonna be a ton of fun.

"It's a great social occasion for meeting new people and trying new brunch menus,” he adds. “If you are going to brunch, why not brunch with a bunch of friends and give back in the process?”

All you have to do is show up. Easy peasy. See you there.