The guys of The Six Pack radio do Atlanta 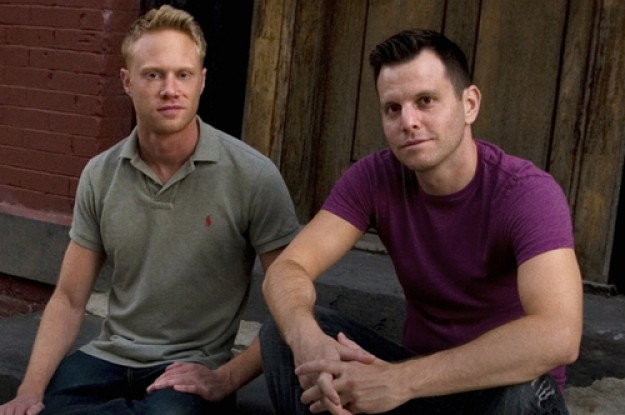 You know you’re all about a six pack. Whether it’s of the ab-licious variety or your fantasy Joe Sixpack, both are represented in The Six Pack, a big gay online and Sirius XM show that hit Atlanta last week for a visit with hosts Ben Harvey and Dave Rubin.

Harvey (top photo, left) has the abs. He’s also a “Real Houswives” fanatic, radio and TV veteran, award-winning journalist and producer of New York’s GUMBO parties. In addition to his co-host’s own sex appeal, you’d want to share the other kind of six pack with Rubin (right), a working stand-up comedian who also swings impressive creds on TV and radio under his belt.

Together, they serve up the increasingly popular, “gay but definitely straight friendly” Six Pack Radio show with a weekly dose of hot topics talk, celebrity guests and new music with a focus on what’s trending now, from news to views to dudes. 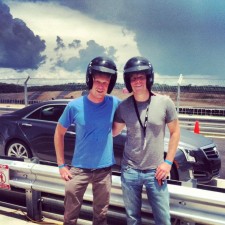 If you haven’t yet tuned in to The Six Pack online, caught the guys on SiriusXM Saturdays, or downloaded them, you just may have caught them in Atlanta last week schmoozing at Blake’s, hanging with Don Lemon, posing with NeNe Leakes, or wheeling the new Cadillac ATS around the Atlanta Motor Speedway (second photo).

We flagged down Ben and Dave long enough to talk about the show, their visit and themselves.

What can people expect when tuning into the Six Pack?
Dave: It’s a show in six parts for an ADD nation, or especially a Gay-DD nation. We do pop culture, politics, interviews and some other fun stuff you have to listen in to find out.

Ben: We’ve interviewed everyone from Joy Behar to Barney Frank to Steve-O from Jackass. And plenty of Bravolebrities like Bethenny Frankel and Andy Cohen. The topics are often pretty gay, but definitely straight-friendly.

Tell us about you.
Ben: My background is in music radio. I moved to New York to work for K-Rock, Howard Stern’s station. Transitioning to talk radio with Dave has been a great experience, and our on-air relationship has grown a lot in three years. It’s a brotherly rapport and no we’re not a couple! I’m newly single.

Dave: I’ve been doing stand up comedy for about 14 years and radio is the perfect place for a comic. You can say what you want, when you want and how you want. My mom wishes the show was a little less dirty, but as I always tell her, I know an awful lot about Whoopi’s vagina from “The View.” My relationship status is highly top secret. 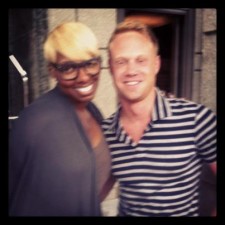 What were you up to in Atlanta? Tell us about the ATS Cadillac launch and what the hell you were doing at the racetrack.
Dave: GM is one of our premier partners and they thought it’d be fun to throw us in a new car on a racetrack and see what happens. Not only did we escape alive, I think we taught some of the pros a few new tricks.

Ben: Being from New York City, we don’t drive on a regular basis. Thankfully, Cadillac trusted us with their new machine. The ATS is the first glimpse into what the future looks like – it puts on the brakes automatically so you don’t hit anyone, ever. That’s some cyborg type stuff, and I’m still trying to wrap my head around it.

How did gay Atlanta treat you?
Ben: We met up with some listeners at Blake’s and had a grand old time. No offense to NYC gays, but ATL guys sure know how to sing karaoke [It was a Tuesday, y’all]. The most welcoming surprise was running into NeNe at our hotel (bottom photo). I can’t say she was exactly psyched to take a photo with me, but she put on a big smile at least. She’s like Cher in this town, right? Right?

Dave: We made it out to Blake’s and got to check out the gay part of town. I’ve never seen a fully gay strip mall before! Plus your local gay ambassador Don Lemon showed us around.

The Six Pack airs on Saturdays from 1 p.m. to 3 p.m. on SiriusXM’s Out Q (Channel 108). Ben says to call in and talk about anything you want and sends belated thanks for the Southern hospitality. The Six Pack is also a weekly online podcast available on iTunes or via apps for iPhone, iPad and Android. Dave says it’s all free, “and in this economy, that’s what it’s all about.” You can also like them on Facebook and follow them on Twitter.