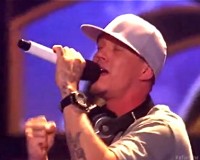 In the sprit of Thanksgiving, The X Factor moved to Tuesday and Wednesday this week to avoid giving the country indigestion and also to unceremoniously dump two contestants.

The theme was, of course, giving thanks, which gave the remaining contestants plenty of opportunity to rehash their sob stories and sing schmaltzy songs.

Rachel Crow, rescued from a crackhouse by her adoptive parents, sang ” I Believe” wearing a tablecloth from the Walmart holiday collection surrounded by a stage full of backup singers and a well-timed confetti cannon. The judges were creaming their corn over it, but maybe I’m just a curmudgeonly old pilgrim.

Holy roller Marcus Canty sang Boyz II Men’s “Mama” to honor his single mom who walked two miles in the snow everyday… or something like that. He sang a bunch of notes (and never quite hit any of them) while his mom sat in the audience fanning herself and crying. He’s still bland to me, and the constant ceiling eyes to Jesus is hella annoying. Yeah, I said hella.

Melanie Amaro talks to God when no one else is around (and now speaks with a heavy Caribbean accent – WTF?), so she dedicated her cover of “The World’s Greatest” complete with full gospel choir and the entire audience magically waving glow sticks. This was the most animated and passionate I’ve ever seen her, so if Jesus is what injects her with personality then praise Allah, Buddha and Xenu.

Chris Rene (top photo) thanked his drug rehab counselor before launching into a toneless hip-hop version of “Let It Be” mashed up with “Young Homie.” If this wasn’t sob story week, I doubt there would have been so much ass kissing.

Lakoda Rayne began their performance of Taylor Swift’s “You Belong With Me” sitting in vine-covered swings like they were in a feminine hygiene commercial (Lakoda Rayne, for that no- fresh feeling). Their vocals were all over the place and Simon said it was the group’s best performance, but they were still going home. Booya!

Leroy Bell (middle photo) sang Sarah McLachlan’s “Angel,” which is now synonymous with abandoned and abused dogs. He dedicated it to his dead mama, so no need to kick an old dog when he’s down. 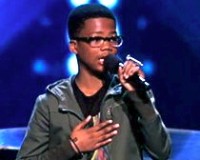 Astro (bottom photo) was still trying to defend his actions from last week when he went total diva brat after winding up in the bottom two, but he’s oh so sowwwry. His rap (a rewritten “Show Me What You Got”) was all about being stupid last week and all the love his Twitter supporters showed him. Keep groveling to those Astronauts, Asshat.

Drew dedicated Demi Lavato’s “Skyscraper” to her best friend, Shelby, because they might be losers but they’re besties forever. Drew tried to be less emo and hit some higher notes, but she sounded terrible. LA Reid obviously had never heard the song and said she was singing music for a 40-year-old, which made Simon puff out his moobs and call LA “rubbish.”

Josh Krajcik has a 13-year-old daughter (first we’ve heard that) and dedicated “Wild Horses” to her. He accompanied himself on the grand piano, also a first. He got the pimp spot, and they wrung out every inch of drama.

Lakoda Rayne got sent home within the first 20 minutes of Thursday night’s show, which means Paula failed all of her groups. Better hook up a Vicodin drip stat for Miss Pills. Leroy and Marcus were in the bottom two, and the judges deadlocked on who to send home, which meant the public voting numbers made the final decision. In the end, Grandpa Leroy was sent to the chopping block.