‘The X Factor’: The finalists are revealed 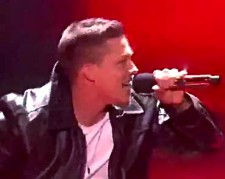 Viewers chose one of the songs they wanted to hear the Final Four sing this week in the much-hyped “X Factor” Pepsi Challenge. And obviously, the viewers were locked in some kind of ‘90s nostalgia time warp.

Before the singing began, judge Nicole Scherzinger had to endure a few more boos from the audience while she was discussing last week’s controversial dismissal of little Rachel Crow. Nicole, who sent the vote into deadlock thinking Marcus Canty would be sent home, was vilified by fans and the media for shirking her duties as a judge and mentor. Nicole said the boos had made her stronger. I’m pretty sure Nicole won’t be back next season, so she better take those boos to the bank.

On to the singing.

The public chose Sugar Ray’s “Fly” for Chris Rene (top photo), and he totally sucked. Out of breath and unable to sing his own lyrics, he was a fish out of water. Even worse was his own choice of Alicia Key’s “No One” while he played chopsticks on the piano. You could hear more of the back-up singers than Chris, plus he was dressed like a missionary as the producers try to shed him of his junkie past.

For the viewer’s choice song, Marcus Canty was in full cheese mode singing Boyz II Men’s “I’ll Make Love To You” while holding a white rose. Girls were dancing behind him in teddies. Calling it corny is an insult to corn. For his second song, the God Warrior did the disco version of George Michael’s “Careless Whisper.” Oh, the irony!

Melanie Amaro’s (middle photo) Pepsi Challenge song was Mariah Carey’s “Hero,” which Simon said he’d given a “twist” to make it more contemporary. I guess adding a gospel choir at the end was the twist. Stop yanking my dick, Simon, unless you’re wrapping $100 bills around it. Her choice was “Feeling Good,” which even Nina Simone would have called tired and overplayed at this point. I can’t even hear that song without thinking of Jennifer Hudson and Jenny Craig. 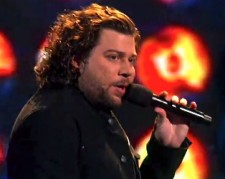 Viewers foisted The Beatles’ “Come Together” on Josh Krajcik (bottom photo), and he sounded more constipated than usual. It’s another song that should be banned from singing competitions forever, but I guess Paul McCartney is saving up royalties for his next divorce. Leonard Cohen should also reclaim “Hallelujah,” which becomes more and more cliché every time some wannabe sings it. I’m looking at you, Josh.

On Thursday night’s show, the three going to next week’s final was no big surprise: Melanie, Josh and Chris. Marcus was finally shown the door, although he should have gone home three weeks ago.