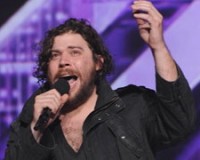 The loopy Paula Abdul we all know and love returned this week, babbling non-sequiturs and fighting with Simon Cowell. Oh, and there were two nights of auditions in there, too.

After watching Simon and Paula for so many years on “American Idol,” I don’t remember them ever getting so testy with each other so early in the game. Paula knocked food out of his hand, told him to “shut the hell up” over an open mic during a break in the auditions and refused to budge from a “no” when one of Simon’s favorites was in danger of being sent home. Sure, it’s all played up, but I think Simon does it to get a rise out of Miss Pills. It makes for better television.

In Chicago, Cheryl Cole got another hour of American exposure before being shown the door permanently as a judge. Her sweet, honest comments are diametrically opposed to her replacement, Nicole Scherzinger, who was in full diva bitch mode when she tried to prove to Simon she could sing by howling Whitney’s “I Will Always Love You” at the expense of a girl trying to audition. Is “The X Factor” about the judges’ drama or the singers? Hard to tell.

On Wednesday, the auditions in Chicago kicked off with best friends Brock and McKenna singing sweet harmonies on “Cold Weather” by the Zac Brown Band. Before he even said it, we knew Brock had been in love with McKenna for ages, but she was blithely oblivious – or maybe she thinks he’s gay.

Josh Krajcik (top photo) had “fail” written all over his big daddy bear body, especially since the 30-year-old burrito slinger had his loony mom drive him to the auditions. Josh surprised everyone with a soulful take on the overdone “At Last,” while backstage his mom turned into a Kristen Wiig character in need of sedation.

In Seattle, Drew Ryniewicz, a 14-year-old Justin Bieber fanatic, decided to sing a ballad version of “Baby” and did it better than Bieber. Something tells me she doesn’t care as much about singing as replacing Selena Gomez as the Bieb’s arm candy.

4Shore (second photo) wants to be “the biggest boy band in the world” and showed they had some musical chops on Boyz To Men’s “Until the end of the Road” (written by judge LA Reid, and don’t you forget it!). Overconfident but cute hipster waiter Philip Lomax channeled the Rat Pack for “Fly Me to the Moon.” He’s a one-trick pony and won’t make it out of boot camp. 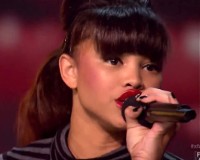 Wednesday wrapped with the epic battle for the soul of Tiah Tolliver (third photo), with her Lisa “Left Eye” Lopez clip-on bangs, bee-stung lips and gap-tooth smile. Earlier, Simon had noticed that any pretty girl who had vocal ability was getting shut down by Paula and Nicole. He started calling the girls DOA (dead on arrival), but Simon and LA decided to put up a fight for Tiah, despite her inability to sustain a note.

In Newark, 14-year-old Brian Bradley – he’s the next Jay-Z or Kanye, according to him – almost brought too much swagger as he tried to get in Simon’s face, but it was all part of his shtick as he powered through “Stop Looking At My Mom.” LA Reid was seeing dollar signs, calling Brian a “triple threat.”

One of the more awkward moments was with best friends Austin and Emily, who call themselves AusEm (vomit!). They were like a second-rate Rachel and Kurt with their high school drama histrionics, but it got really dicey when the panel really only wanted to put Austin through. Nicole waffled and Simon got pissed and walked off stage, but they both got through to boot camp.

We were treated to a big dose of glitter courtesy of Jor-El Garcia (I can’t with that name), who performed Madonna’s “Lucky Star” like he was twerkin’ for his life. Simon looked horrified, naturally. We also got some douchebag action thanks to Brennin Hunt, a 26-year-old male model who’s been trying to make it in Nashville. He got through to boot camp, of course. You could hear Paula’s panties sliding to the floor as she watched him.

The two to watch in boot camp are undoubtedly Tora Woloshin (bottom photo) and Jazzlyn Little. Tora is my favorite, with her platinum blonde hair, tatts and love of building racecars. She already looks and sounds like a star, and her cover of “I Want You Back” was flawless. Jazzlyn came across as shy little flower until she belted Mary J.’s “I’m Going Down” and brought the house down.

See you next week for boot camp.