‘The X Factor:’ Home and Away toward final cut 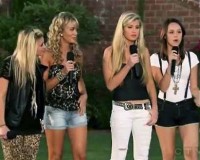 Baseball pre-empted “The X Factor” last week, which moved episodes to Thursday and Sunday. The 32 contestants who survived boot camp went to the “judges’ homes” to sing one last time before the field is cut to 16.

The girls got to jet off to the south of France to sing for Simon Cowell, while the boys went to LA Reid’s home in the Hamptons. The over 30s and groups got stuck in California with Nicole Scherzinger and Paula Abdul, respectively.

Mariah Carey was grounded by Hurricane Irene and couldn’t join Cowell in France, so he asked some underlings to give their opinions, which he ignored. Rihanna showed up to help Reid, Pharrell sat with Abdul, and Enrique Iglesias had little to add while advising Scherzinger.

Nerves seem to get the best of some of the stronger contestants, not to mention being saddled with shitty songs. Poor Tora Woloshin was stuck with a horrific techno version of “Satisfaction,” while the thrown-together girl group Lakoda Rayne (sounds like a stripper’s name or cheap drugstore perfume, top photo) sang a monotone, quasi-country cover of Lady Gaga’s “Born This Way.” 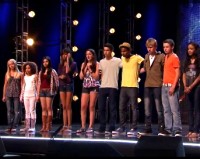 Stacey Francis went gospel on “Purple Rain,” and while she has a fantastic voice, she just couldn’t resist the vocal histrionics. Dexter Haygood channeled Mick Jagger, leaping around like a spawning salmon and only flirting with the actual lyrics. After the song, he collapsed in sobs saying he didn’t do well enough. Sad, but true.

Surprisingly good was Sinatra-style crooner Philip Lomax, who was forced to show off his vocal range with Rihanna’s “Please Don’t Stop the Music.” He sang a jazzy, down-tempo version, but I actually liked it. The trio of cute boys who call themselves The Answer have great harmonies and would surely be a hit with the ladies (and gentlemen) if marketed well.

The songs doled out by the judges kept getting more and more bizarre, with terrible arrangements that suited no one. For instance, Jazzlyn Little (so nervous I thought she was going to piss herself) and her Muzak version of “I Will Survive”; girl group 2 Squared appearing to lip synch a truly horrendous cover of “Bohemian Rhapsody”; little Rachel Crow singing a death march version of “I Want It That Way”; a boy band horror show cover of “Let’s Dance” by Illusion Confusion; and Tiah Tolliver’s way-too-slow “No Diggity.”

Then there was Intensity (middle photo), the 10 solo artists forced into a group, who did a questionable mash-up of “That’s Not My Name” and “You Make My Dreams Come True” like they were at a Mickey Mouse Club hoedown.

My favorites over the two nights were wedding singer Elaine Gibbs with an emotional cover of “Stop Crying Your Heart Out” by Oasis, and dark horse Melanie Amaro (bottom photo), who found grace notes in the schmaltzy “Will You Be There.”

We find out which 16 acts move on to the live shows in a special episode on Tuesday at 8 p.m.