‘The X Factor:’ From boot camp to booted

Judges wasted no time showing the door to slew of not-good-enoughs at boot camp on “The X Factor” this week. Over two nights, more than 100 were axed leaving 32 to go for the $5 million check and recording contract.

Wednesday’s episode and most of Thursday gave us a chance to see the contestants we’d already seen in the audition rounds talking about how winning was going to change their lives and Paula “Miss Pills” Abdul sobbing uncontrollably. Simon couldn’t help but take another swipe at “Idol:” “This show is about finding a long term recording artist, not just the winner of a talent competition.”

After singing in groups of 10, a shitload of contestants were dropped almost immediately. The rest were put into groups and given a song to sing. There was also a dance camp, wardrobe suggestions and vocal coaching.

Brian Bradley, the obnoxious little rapper, refused to dance during the boot camp then tried to sabotage his group by singing over them, yelling random “yeahs” and “whats.” When asked why he wasn’t dancing, the little brat responded: “I’m an MC. MC’s don’t dance.” Someone take away this kid’s blanky and put him in timeout.

Some other interesting tidbits: One of the contestants was Audrey Turner, who married the late Ike Turner after Tina took one too many beatdowns; Tiah Tolliver (top photo) proved, at last, that she was good enough to be on the show; lovelorn Brock might actually get past hugging McKenna one day; Prince wannabe Siameze’s mom used to sing with The KLF (you were either stumbling into or out of Backstreet as “3 a.m. Eternal” blared over the sound system – admit it); Stacey Francis skipped her father’s funeral to be at boot camp; and Chris Rene, the drug addict fresh from rehab, competed against his sister, Gina.

But not all of them made it out of boot camp intact.

At the end of Thursday’s show, the field was cut to 32 and separated into girls, boys, over 30 and groups. Next week, they go to the “judges’ homes” (although I’m not convinced those mansions are where Simon, Paula, LA and especially Nicole actually live) to be mentored for the rest of the competition. 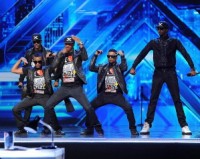 Groups (mentored by Paula): 4Shore, The Anser, Brewer Boys, Stereo Hoggz (bottom photo), 2 Squared and Illusion Confusion. Since there weren’t eight groups to put through, the judges decided to take some of their favorite solo castoffs and make groups out of two of them. We didn’t get all their names, but chances are they won’t make it – especially with batty Paula mentoring them.

After next week’s episodes, the field will be cut to 16.