Weak dance songs and boring personal songs dominated this week’s “X Factor,” but it was dumbass judge Nicole Scherzinger who made all the headlines with an elimination miscalculation.

Over-produced doesn’t even come close to describing this week’s wretched choreography, seizure-inducing lights, and mostly piss-poor song selection (each contestant sang twice, as if once wasn’t enough). There was also an alleged goof with the heavily pimped Pepsi song challenge, which forced last minute song changes and more opportunity to ratchet up the non-drama.

Melanie Amaro did a horrible remix of Adele’s ballad “Someone Like You.” She seemed fairly uninterested and said before the show that dance wasn’t her style. Simon said she could have a hit with the cover, but I think Adele beat her to it. On her second song, she went gospel diva on Whitney’s “When You Believe.” It was predictable and safe. Despite the last minute change, they found a full gospel choir to back her up. If her accent gets any thicker, we’ll need subtitles.

Marcus Canty was rebuking the devil and trying not to stare at the lady dancers while covering Chaka Khan’s classic “Ain’t Nobody.” He sounded nasally, and the whole Ne-Yo vibe just wasn’t working. For his second song, he chose Donny Hathaway’s “A Song For You,” which, like Melanie, was boring and safe.

Rachel Crow (top photo) sounded terrible covering “Beautiful Girls.” She was out of breath, pitchy, and the song totally didn’t suit her. Even worse, LA Reid was giving her lesbian side-eye since she didn’t change the lyrics to B.o.B’s hit. What a moron. Her second song was a cover of Michael Jackson’s “Music and Me,” one of his lesser known and most boring songs – musically and lyrically. 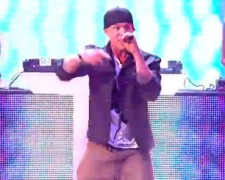 In the ongoing, ruthless pimping of Rhianna, Josh Krajcik growled his way through “We Found Love,” which Rhianna herself sang on the show a few weeks ago. His second song was a bowel-movement inducing cover of The Beatle’s “Something” – and by that I mean he looked like he was taking a really hard dump.

And because covering one Rhianna song wasn’t enough, Chris Rene (bottom photo) had to do “Live Your Life” (rewriting the verses if course). He was dancing on a moving sidewalk (how early ‘90s) and almost fell off, which was about the most interesting bit of his performance. He sang his own song, “Where Do We Go From Here,” which was by far the best song of the evening. At least there was a little passion.

On Thursday night’s results show, Marcus and Rachel wound up in the bottom two, and Nicole Scherzinger fucked up by sending the vote into deadlock, despite Rachel giving the obvious better “sing for your life” performance. Nicole obviously thought Rachel would win over Marcus, but the public vote decided otherwise. Rachel collapsed in a screaming fit, and the audience booed Nicole off the stage.