‘The X Factor’: And the winner is… 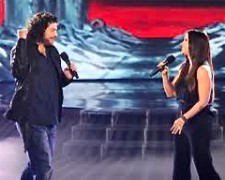 After three months of competition, it came down to the final three – Melanie Amaro, Josh Krajcik and Chris Rene – battling it out to become the first winner of the American version of “The X Factor.”

Josh opened Wednesday night’s show singing a soulless cover of Alanis Morissette’s “Uninvited,” but then Alanis showed up and sang him off the stage (top photo). I hadn’t seen Alanis in a minute and she was giving me Punky Brewster/Jennifer Love Hewitt fever. Josh gave one of his most impressive performances to date on his second song, a simple guitar cover of Etta James’ “At Last.”

Chris Rene is eight months sober and seemed genuinely overjoyed to be singing “Complicated” with Avril Lavigne. Two Canadians? Is Simon angling for a Canuck version of the show? For his second song, Chris sang “Young Homie” again, which is fine but I wish he’d done something else. If I had to be the final judge, I would pick Chris to win the whole thing, mainly because he seems grateful to be there. 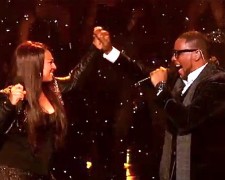 Melanie should have been wearing a raincoat to make sure R. Kelly didn’t pee on her during their duet of “I Believe I Can Fly” (middle photo). He was desperately trying to match her vocal and it was more than a bit histrionic. She was in full screaming diva mode (bottom photo) for her second song, a cover of Beyonce’s “Listen,” but her Caribbean accent that appeared mid-way through the season appeared to take the night off.

The final three were also forced to sing “They Don’t Really Care About Us” while a phalanx of Cirque du Soleil dancers in full Terminator gear from “Michael Jackson’s Immortal” show stomped around the stage. Watching Josh try to replicate some MJ moves was hilarious.

Thursday’s finale was two hours of filler – including a hot mess reunion of the Top 12 massacring Lady Gaga’s “Edge of Glory,” Drew “I’m only here for Jesus and Justin” Ryniewicz singing with Bieber. And the majority of 50 Cent’s new song being bleeped out while a bunch of lady dancers spanked themselves (and Astro got to sing a few lines, too).

So who won? Melanie Amaro was a shoe-in from the beginning, so not really a big surprise.

“The X Factor” will be back next fall, but it’s in major need of a house cleaning. Dump useless Nicole Scherzinger; kill the wretched theme nights; and fire that wooden plank of a host. Even more importantly, the songs need to change. The contestants need to sing more originals, and there should be a ban on every song by Mariah, Whitney and Beyonce.

Happy Holidays, and thanks for reading the recaps, even when they were full of snark.

Collin Kelley’s new mystery/suspense novel “Remain In Light” is out now in eBook format and will be available in paperback in January. He’s also a poet, activist and editor of Atlanta INtown. Find out more on his website.