The other stuff Grindr queens do on their phones 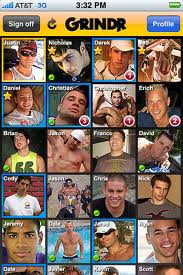 Atlanta’s hung, kinky, size queens love them some Grindr. That’s no secret. But the Grindr gays also like to hit the road and stay in posh hotels while they travel. Those are among the findings of a survey of more than 5,400 Grindr users -- you know, when they had a few minutes between hunting for nearby tricks to respond to survey questions. Turns out, more than half (54 percent) of Grindr users travel for business. Yeah, sure. “Business.” And the findings, culled form the 16th Annual Gay & Lesbian Tourism Report, show that nearly 40 percent of Grindr users boosted their travel in 2011, and those guys are a fancy bunch. Some 23 percent stay in luxury hotels, while 48 percent pick a mid-range place. You cheap asses in the Days Inn better not put that in your Grindr profile. The luxe gays so won’t be coming to trick in your motel. That's just gauche. Survey also says Grindr users are doing the following with their smartphones -- when they are not grinding, of course: • 57 percent use smartphones to prepare for their trips; 73 percent use smartphones during their trip. For what? You really need to ask that? • 23 percent booked flights and 24 percent booked accommodations using their mobile devices. • 61 percent updated their status and shared photos of their travels using smartphones through Facebook. • Nearly 31 percent checked in or posted comments on geo-location apps through their smartphones. Who knew the gays who Grindr during dinner, while on the treadmill at the gym and even in the sauna know how use their smartphone for something else. Chat about that during Jungle's Free GRINDR party with DJ Rob Reum on Jan. 14.