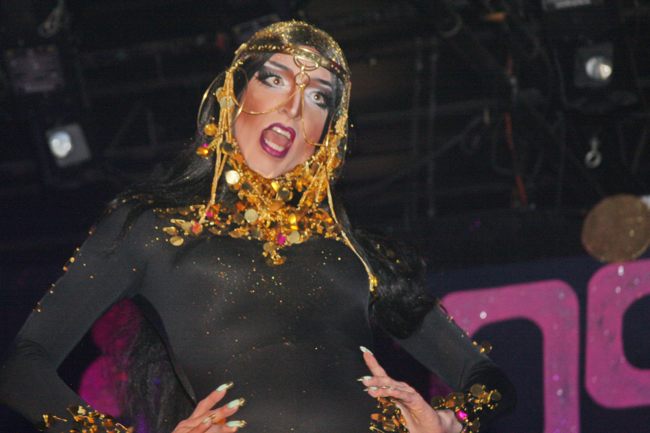 It’s just been six months since Edie Cheezburger took the Dragnique 3 crown, but gay Atlanta indeed found a star. On Friday, Jungle debuts Cheezburger’s The Other Show as a whole new concept in drag and as a preview of the club’s new Jungle Room. Cheezburger (top photo) emerged from the other talent in Atlanta’s fierce Dragnique competition with a high-concept, clear victory in April. Atlanta’s next drag superstar won four of the five challenges as the other girls fell one by one. Her unique beauty, artful approach and no-holds-barred take on drag dominated so hard that she’s already offering tips and secrets to attaining Dragnificence. Seems she's popping up in a new drag look every time as an Armorette, in special guest appearances, as a judge, and even in random drag fly-bys all over town. She brings all that and more to the stage in Jungle’s new Jungle Room at Friday’s The Other Show premiere, raising the standard with an eye toward the future of drag. The show debuts in a weekly slot on Nov. 23. “The Other Show is at it's core very conceptual, alternative, and avant-garde,” Cheezburger tells Project Q Atlanta. “It is meant to be a very different type of show than what is currently available in Atlanta. We are pulling a lot of inspiration from San Francisco and New York. I highly encourage my girls to step out of their comfort box and try new and different things. You'll see a very wide range of drag coming from the cast.” Those girls include some newer queens and names already known for fresh, inventive drag. With Cheezburger at the head of the pack, look for regular cast members Jasmine Antoinette, Jaye Lish, Justice Tyana Taylor, Miami Royale and Violet Chachki. “I handpicked people that I'm excited to watch, Cheezburger says. “We have a very diverse cast, and I've tried to make sure that people's styles don't overlap too much. We have funny, we have fierce, we have burlesque... I'm really happy that everyone wanted to work with me on this. “There's an amazing opportunity that we have to help shape what is happening in the community,” she adds. “Without throwing too much shade, there's a lot of sameness in the scene, and we're here to shake it up a bit.” Speaking of shaking things up, Cheezburger credits Jungle and owner-manager Richard Cherskov for the show and the opportunity. The Jungle Room’s more intimate setting sits adjacent to that infamously packed, shirtless dance floor. The loungey dinner-theater vibe is part of the $250,000 renovations going on at Atlanta’s favorite gay dance club. “Richard is amazing to work for. He's really excited about us coming and trying something different,” Cheezburger exalts. “He approached me about this idea, and we've really come up with something exciting for Atlanta. I'm honored that he's chosen me, someone who's really new and fresh to the scene, to headline and direct the vision of the show.” Any tricks up Cheezburger’s sleeve? You know there are, but she’s playing it close to the vest. “You'll have to come watch!” she says. “I like to mix things up and keep it interesting. I'm not one for a lot of repetition. Come see our show! It could quite possibly be the most interesting thing you do all week.” The Other Show debuts on Friday, Nov. 2 at Jungle in the Jungle Room, 9:30 p.m. doors, 10:30 p.m. showtime. Stick around and dance with DJ Thomas Byrd in the main room after the show.