The gays of HBO’s ‘Looking’ dish while in Atlanta 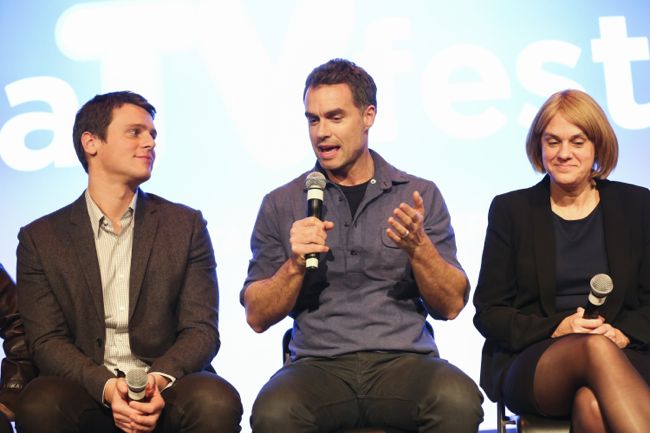 The hunky gays of "Looking" and their gay for pay castmates weighed in about sex on the HBO show, the script and if they really are the gay "Girls" during a dish session in Atlanta on Friday.

Love it or hate it, the gay-themed show has people talking, tweeting and even creating hilarious parodies over its portrayal of gay life. Cast members Jonathan Groff (Patrick), Murray Bartlett (Dom), Frankie J. Alvarez (Agustin), O.T. Fagbenle (Frank) and Raul Castillo (Richie), joined by the show's executive producer Sarah Condon, fielded questions about the show during a panel discussion and media interviews on Friday during aTVfest at SCAD.

Bartlett, whose Dom is about to turn 40 amid worries that he's in the same server job he's had for years, says the central trio of the show–Groff, Bartlett and Alvarez–hit it off quickly once they started production.

“In terms of the relationships, we connected immediately when we met,” Bartlett says. “We had the opportunity to hang out. We wanted to hang out together. Our relationship developed off screen as it did onscreen.  The scenes with the three of us, there is a naturalism that comes from the rapport that we can naturally use.”

The cast shot the pilot in April 2013 and then the second episode in September.

“In those months, we inundated each other with each other’s lives,” Alvarez says. “Partners were met, as were friends, wives; we’ve been partying, seeing shows. We really are friends. If the show were to get canceled, I don’t think we’d delete each other’s phones.”

According to the actors, the script was 100 percent as written when they came to the set.

“[Director Andrew Haigh] is really good at capturing naturalism,” Groff says. “He would encourage us to improv in and out of a scene. Sometimes he would use that in the final cut. But it all stemmed from their world and letting us have a place to play around it.”

Agustin, played by Alvarez, was originally written as a Venezulean with a dialect but that later changed.

"Looking" hit its stride on Sunday with its fourth episode, its best and most playful yet. Dom strikes up a friendship with Lyn, an older business owner played by Scott Bakula. The two met in Episode 3 during an encounter in a bathhouse steam room. And Patrick takes a break from his sorta-flirting with his boss Kevin (Russell Tovey) to don a leather vest and attend Folsom Street Fair with Agustin. Later Patrick redeems himself with Richie, who Castillo promises we’ll see more of during the season.

A decision should come soon on whether there will be a second season. "Looking" airs after HBO's hit "Girls," which prompts repeated questions if the show is the gay "Girls" or an even gayer "Sex and the City." But the actors insist they are telling their own stories and not trying to be anything else.

“I didn’t think about it until the show started airing,” Groff says. “But when it did air people had these opinions on whether it did or didn’t represent, or qualities that were not accurate or were completely accurate. It’s great to get people talking.”

But the actors know that the show comes with heavy expectations. “It’s not possible to please everyone,” Alvarez adds.

Condon, the show's executive producer, admits that it wasn’t a mandate to hire gay actors for the show. For the record, both Groff and Bartlett are gay but Alvarez is straight.

Bartlett has played gay before in the independent film “August.” He was also a series regular on “Guiding Light” as Cyrus Foley for two years. Alvarez appeared in the short-lived “Smash.” Groff is the best known. He’s a Tony nominee for “Spring Awakening,” has been seen in “Glee” and voiced a role in the hit “Frozen.” He also appears in HBO’s upcoming “The Normal Heart.”

Groff applauds "Looking" for tackling realistic issues, including open relationships. Agustin and Frank move in together and talk monogamy but enjoy an impromptu threeway.

“For everyone in a long-term relationship, you have to sacrifice to make it work,” Fagbenle says. “A big area is sex and how it changes over time. I think it’s a precarious path to tread. Some people, gay and straight, are curious about opening it up. All relationships are snowflakes, individual, and you have to navigate that."

And that on-screen sex? Bartlett admits it’s just part of the deal.

“It’s always weird to do an intimate scene, but there is a lot of trust [here]. When you’re in your little sock and he’s in his sock, at this point you’re just like ‘let’s go for it,'" he says. 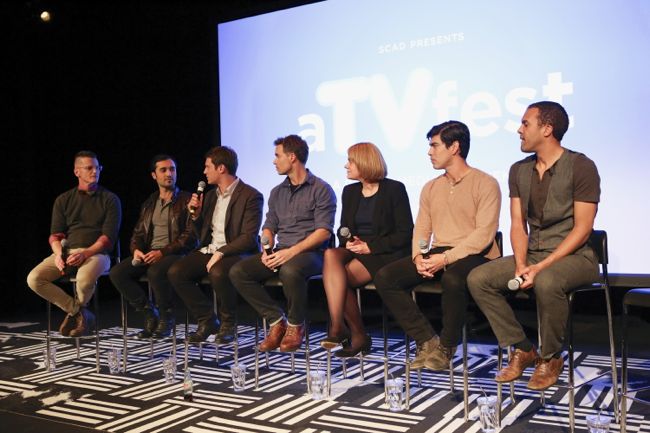