The gay experience summed up in 4 tasty words 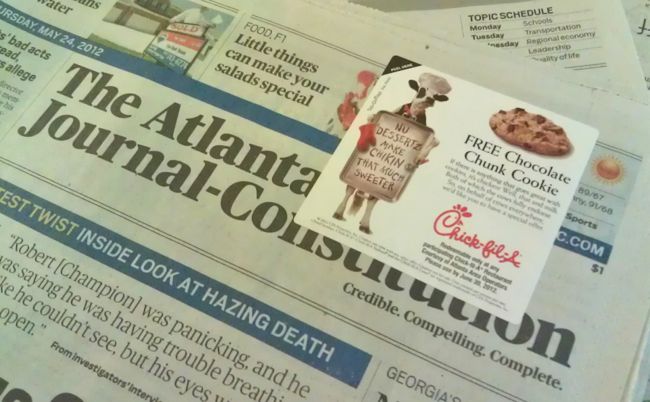 A coupon stuck to the front page of my Atlanta Journal-Constitution sums up the gay experience in four simple, delicious, appetizing, mouth-watering yet evil words: “FREE Chocolate Chunk Cookie.” It’s so much more than a cookie. It’s the symbol of a great gay debate and a piece of scrumptious yumminess that derails any effort to trim the tummy and sculpt the abs in time for summer. It is, in all of its cookie dough glory, a symbol of the gay experience. Drag queens say so. How’s that? Let’s break this down, morsel by tasty morsel. It’s Chick-fil-A. And there’s an extreme amount of gay guilt associated with eating at this Atlanta-based restaurant chain. Or at least there should be if you’re a gay with a conscience. I know. Your courage of convictions lasts about as long as you smell some fresh waffle fries on an empty stomach. Chick-fil-A’s food rocks. And that monster chunk cookie? You betcha! It smells better than the waffle fries, if that’s even possible. So consider this: Chick-fil-A hates you. Not you specifically, but your gay, same-sex marrying kind. Oh sure, they’ll tell you they love everyone and then continue to dish out their chicken-soaked cash to anti-gay groups. Their bossman will run with the gays and those who support HIV non-profits while continuing to mislead you about WinShape and its stand on gay marriage. They hate you. OK, ok. It’s just a cookie. But not only does Chick-fil-A hate you, your abs will hate you for eating it. That’s how we get to the second way in which this simple coupon – this image of chunk cookie heaven – represents the gay experience. It will make you fat. Who wants to see that strutting shirtless along the beaches of Pensacola this weekend? Fat gays ruin the stereotype that gay porn creates that feeds our drive to be lean, muscled queens groaning in the gym so that guy at the party groans at us in appreciation when we sashay on by. This cookie not only creates a tug-o-war between your gay conscience and your stomach, it also creates a battle between your taste buds and bulge. Not that kind of bulge. The kind that creates muffin tops, 320 calories at a time. It’s pool party season, girl, and this cookie will crumble your hopes of firming up those abs for the new square cut you bought. Whatever, bitch. I’ve got a coupon!