The gay case for Mary Norwood as ATL mayor

MORE | The gay case for Kasim Reed as next ATL mayor 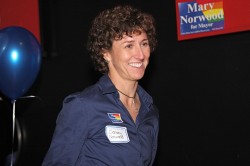 My name is Dorsey Norwood. I’m not a political activist or anything of the sort. (I generally follow the news just enough to know what’s going on and stay moderately informed.)

I’m a local pediatrician who has lived a rather quiet life with my partner Melody Durrenberger at our home in the Collier Hills neighborhood of Atlanta. But that’s before my step-mom decided to run for Mayor of Atlanta.

Mary has always supported me. In a recent Southern Voice article, where Mary is quoted as saying that her response to my coming out was that it was “grand,” she wasn’t lying. I was so relieved that Mary was so accepting of me. She has continued that acceptance and love over the years. Recently, she has welcomed my partner Melody into our family.

You should know that Mary has served on the Atlanta City Council for eight years. But she’s been a neighborhood activist since I was a young girl (we’ll just say that’s been a few years and leave it at that). She’s been working to combat homelessness and those eyesore “McMansions,” support our police and firefighters (it’s why they’ve endorsed her candidacy) and make our neighborhoods more safe and livable.

My step-mom is anything but status quo. She’s had the courage to butt heads with folks in the city her entire life while trying to make Atlanta work for everyone. She’s done a pretty good job considering how so many folks have continued to put up roadblocks to her work for our neighborhoods. I know as mayor, she’ll finally be in a position to clean up our city and make many of the changes she’s fought so hard for so long to make as a neighborhood activist and council member.

In this campaign to help elect my step-mom as mayor, I’ve met some pretty terrific people from across the city and every corner of our community who support Mary.

People like AID Atlanta Executive Director Tracy Elliott, who told me about how my mother was the only member of the City Council who was willing to help make sure the AIDS Walk continued and when the city’s program for low income persons living with HIV and AIDS was threatened, how she stood up and fought for continued funding.

People like Ken Britt, who serves on the board of the Human Rights Campaign, who supports my mom because he shares my belief that Mary is the only candidate who can bring our city together – black and white, north and south, gay and straight – to move progressive policies forward, including policies to improve my life and the life of my LGBT friends and neighbors.

People like Kyle Bailey, who is volunteering for my mom’s campaign full-time because he knows how much Mary loves our city, will make it better and because he trusts her to be a strong voice for equality for everybody, including support for gay marriage.

People like Lawrie Demorest and Lee Kyser who have two young children and who are concerned about the safety of our neighborhoods, the quality of our life in our city and yes, the right to marry and have all the benefits and responsibilities that come with it, most importantly, to protect their children.

It’s true that Mary is the only candidate in this race who supports gay marriage. It’s also true that her opponent is opposed to having my relationship with Melody — and the relationships of all gay couples — treated just as equally as my mom and dad’s relationship. Her opponent claims to favor civil unions on religious grounds.

I did my homework and found that my step-mom was one of the largest donors to efforts to defeat California’s anti-gay Prop 8 in 2008. I can’t say I was too surprised, as she’s been speaking to our community and speaking out for our equity for years. It’s why she’s been in the Atlanta Pride parade every year inviting my father and me to join her. She has been in our homes talking to us about issues that face our city and how our city government impacts the lives of regular LGBT people like Melody and me.

Thank you Mary for being our candidate for change in this election. We need it.

Dorsey Norwood (photo) is a pediatrician who lives with her partner in the Collier Hills neighborhood of Atlanta. She is the step-daughter of mayoral candidate Mary Norwood.