The best queer things to do on Atlanta Pride Weekend 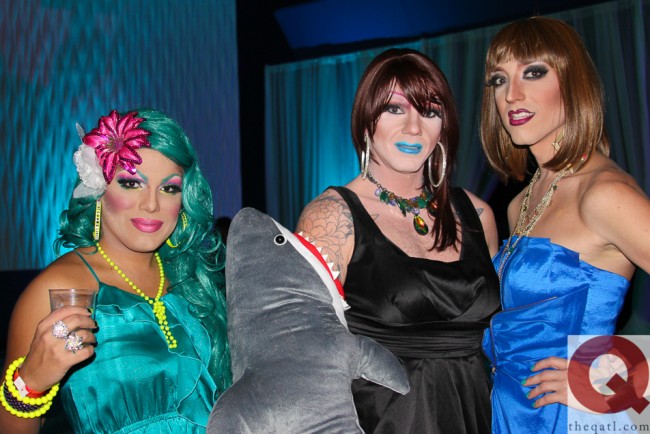 Rainbow up and come on down to more LGBTQ events than you can handle during Atlanta's queerest weekend of the year. Check out dozens of options in and beyond the park and Parade.

The Other Pride Show. Edie Cheezburger, Jaye Lish and the cast bring their brand of drag to their new home @ Midtown Moon, 9 p.m.

Glitz & Glam Dinner Theater. Charlie Brown, the undisputed Bitch of the South and her girls entertain with dinner and a show amid the fancy theater experience of Atlanta’s premiere drag restaurant and bar. Make Reservations @ Lips Atlanta, 6 p.m., 9 p.m. and the Taboo Show at 11:30 p.m.

Sugar Shack. Southern Fried Queer Pride pours some Pride dance party on you, plus a pop-up drag show, because of course @ The Bakery, 10 p.m.

Atlanta Pride. You know what’s up @ Piedmont Park, all day and Sunday too. Saturday park events include but are by no means limited to the Chalk Festival, all day, Drag Queen Story Time, 12 noon, Trans March, 1:15 p.m., Dock Side Tea Dance, 2 p.m., Bi+ Pan March, 3 p.m., Dyke March, 4:30 p.m., and a whole day of entertainment including Kesha.

Fall Festival on Ponce. Away from the maddening crowd, it’s gay-sanctioned arts, crafts, food and milling @ Olmstead Linear Park, all day and Sunday too.

Bottoms Up! Rupaul’s Tammie Brown puts her unique spin on the next Wussy party of the weekend @ Annex Bookstore, 12 noon.

College Football Saturday. The action is on the screens @ Woofs, 4 p.m.

Pride #Daydrunk. Drink specials put you to bed early or make you the life of the party as the sun drops @ Mary’s, 2:30 p.m. Do it, and you may not remember what you did during Gurlfrandz, 10:30 p.m.

Pride Glitz & Glam with Charlie Brown. The self-titled Bitch of the South and her girls entertain with dinner and a show in the theater experience of Atlanta’s drag restaurant and bar. Make reservations @ Lips Atlanta, 6 p.m., 9 p.m. and the Taboo Show at 11:30 p.m.

Pride Cabaret. Theater queens do what they do, once more with feeling @ OnStage Atlanta, 11 p.m.

Atlanta Pride. Everything you loved about Saturday, plus of course the climax Atlanta Pride Parade (bottom photo), down Peachtree and 10th Streets, 12 noon. Events in the park after that include musical acts all afternoon, the Sweet Tea Queer Variety Show, 3:30 p.m., and the imitable Starlight Cabaret, 7 p.m. Remember: Atlanta extends Sunday bar hours for Pride.

View. A decidedly different crowd does the same as above with Rupaul’s Tatiana @ Fox Theatre, 12 noon.

Heifer Review: Pride Edition. Ruby Redd corrals the queens on the patio, this week with the bonus of being HSL’s Extra Inning Beer Bust @ Joe’s on Juniper, 1 p.m.

Falcons vs. Cardinals. For some people, Pride pales to NFL Sunday @ Woofs, 4 p.m.

Best of Atlanta Pride Comedy: Two Shows. Some of your faves including Ian Aber and Brent Star hit the stage to laugh you out of Pride Weekend @ Laughing Skull, 7 p.m. and 9:30 p.m.

She: The Horror of Femme. Queer burlesque with a message, y’all. Why is femininity so horrifying to society? What's so scary about women? Why is the frightening so alluring? Coco Rose and the ladies perform about it @ Red Light Café, 7 p.m.

Armorettes Pride Show. The camp drag crazies with the hearts of gold against AIDS are in their 41st year of weekly shows @ Midtown Moon, 8 p.m.

Misc Edgewood. Watch “kings, queens and in between”in a seven-week elimination competition for the title @ Noni’s, 10:30 p.m. through Nov. 10

This calendar originally appeared in Q Magazine. Read the full issue online below: