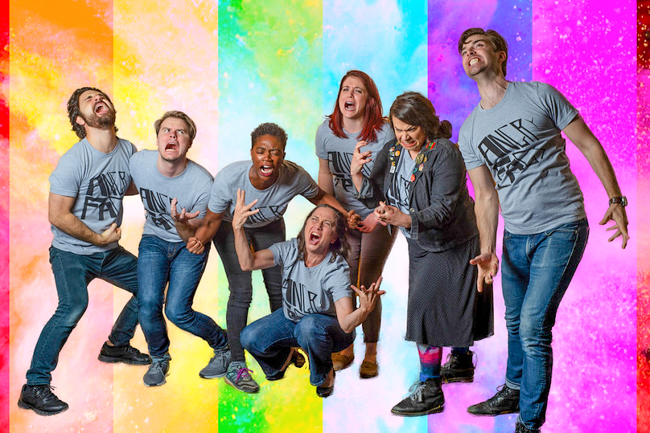 In like a lion, now March is out like a lamb with three days of LGBTQ Atlanta events. Parties, plays, people and Pride are everywhere we turn in the Queer Agenda calendar. Click on the event names for more info.

Angry Fags (top photo). Topher Payne’s sociopolitical potboiler returns with Trump Era updates in the queer show of the theater season @ 7 Stages, 8 p.m. You heard right: There is a clear queer mandate to see this show, running through April 14.

Men With Money. Three young bachelors, two gay and one straight, are looking to marry their way from rags to riches in a re-imagined 1950s @Aurora Theatre, 8 p.m. Now extended through April 14. Read the Q preview.

Falsettos. A new kind of family emerges when a man leaves his wife for a guy in this musical, and a cast of characters including a lesbian couple become part of the thoroughly modern mix @ Actor’s Express. Runs through April 28.

Rocky Horror: Trans Night of Visibility. Lips Down on Dixie performs per uszh, with honors this week to transgender cast members and fans @ Plaza Theatre, 11:55 p.m.

Fantasy Girls. The queens you love doing what you love them to do, cabaret style @ Ten, 9 p.m.

DJ GSP hits down direct from Greece to move the men @ Heretic, 10 p.m.

The Backroom. A new monthly adult comedy hour from the Queeriety folks hosted by Molly Rimswell. So salacious ticket holders get a password @ Village Theatre, 11 p.m.

Evolution: The Journey of Burlesque (bottom photo). Celebrate Coco Rose’s third anniversary as a queer burlesque performer with she and some of her closest pals on stage @ Red Light Café, 5 p.m. As we’ve documented, Miss Coco has a lot to say and a lot to offer.

Transgender Day of Visibility & Trans Week. Come out, come out wherever you are, with a week of Atlanta events starting with Cinequeer Movie Night @ The Bakery, 6 p.m., and continuing all week @ GSU.

Trans Pwr Thrift Shop. This pop-up is the tops in shops for Trans Visibility Day. Sales benefit Southern Fried Queer Pride @ The Bakery, 1 p.m. Stick around for the America in Transition screening, 6 p.m.

A version of this calendar originally ran in Q magazine. Read the latest issue for even more.