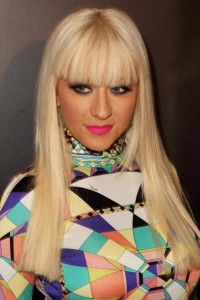 Only dogs and gay men could hear the piercing squeals when a preview video was released for Thursday’s episode of “Project Runway.” Yep, Bob Mackie and Christina Aguilera (photo) will be on the same show.

No, the en masse squeal of delight was not because judge Nina Garcia is back in her old chair on the panel. As if.

In the preview of the newest episode in a season that’s been less than stellar — we’ve speculated that may be due to the big move from Bravo to Lifetime — bitchy and gay-as-the-day-is-long contestant Nicolas calls the collision of gay icons “the best ‘Project Runway’ moment ever.”

We don’t know about that, but it definitely promises to be the gayest of the season, despite five gay contestants who are being picked off one-by-one.

In the challenge, contestants must take inspiration from Mackie – he of the show-stopping signature frocks for everyone from Cher (bottom photo) to Barbie, from Diana Ross to Liberace (See? Gay.) – to design a stage costume for one of his latest muses, X-Tina. 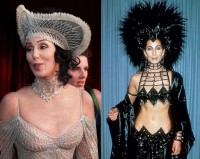 And yes, Nicolas did win one challenge for a scary costume that hearkens the style, coincidentally the gayest “Project Runway” moment of the season until Thursday. Could it be win number two? Hey kids, anything goes.

Who knows? With a challenge like this, maybe things are looking up for the series. Perhaps Thursday’s runway show will follow suit. We can dream, can’t we?

Anyway, here’s the preview, and remember, we can hear you squeal.