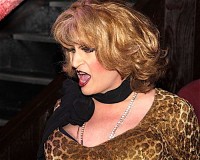 Laughter through tears is not new for Atlanta’s camp drag troupe that raises money against HIV/AIDS. Sunday’s show is no different, as the group pays respects to one of its own, the late Robin Wilson, aka Dixie D. Cupp, who died Feb. 23.

Wilson (top photo, as Dixie), 45, succumbed to a long illness and passed away in his sleep, according to his friend and fellow Armorette Knomie Moore. He leaves behind many grieving friends, perhaps most notably Atlanta locals Jay Mealor and Andrew Farrington.

“[The Armorettes] have lost a major force and a wonderful sister,” Moore says. “The empty gap is large, by measure of his accomplishments and character, and will never be able to be replaced. He was a unique individual, and to have met him, it was a pleasure and a privilege.”

Wilson (second photo) was born in Mississippi in 1964. He started performing as Dixie there, and when he moved to Atlanta, he pursued becoming an Armorette due to what Moore calls his “first and foremost mission in life,” the fight against HIV/AIDS.

Dixie D. Cupp debuted as an Armorettes cast member in 1994, where he used a background in theater to create the dance numbers for which he will be most remembered.

“Each time he performed, he would bring a smile and happiness to audiences at the shows,” Moore says. “It would be nothing to see people tap their toes, singing along, and just having a great time watching Dixie.”

Moore also says that Wilson was known for his understanding paired with a straight-forwardness and honesty.

“You never had a problem knowing where you stood with him,” Moore says.

In his nearly 16 years as an Armorette, Wilson “was right there each time” as much of the $1.8 million the group has raised was donated, Moore says.

“His dedication to the group was undeniable and he was a strong and guiding force for the group’s direction while he was co-chair for several years,” she says.

Sunday’s show also introduces the latest Armorettes cast, which auditioned Feb. 21. The show is dedicated to Wilson, and some of his favorite numbers will be performed in his honor.

Tony Kearney, aka Wild Cherry Sucret of the Armorettes, notes that “Love Will Keep Us Together” was one of Wilson’s favorite songs, and that it is appropriate for how the Armorettes will forge on in his absence.

“Dixie would not want us to be sad, but to celebrate her life as only the Armorettes know how,” Kearney says.

UPDATE | MARCH 3: Wilson’s funeral was Feb. 27. A memorial service with friends and fans is scheduled for 2 p.m. on March 28 at St. Mark’s United Methodist Church. View photos from the Armorettes tribute show.