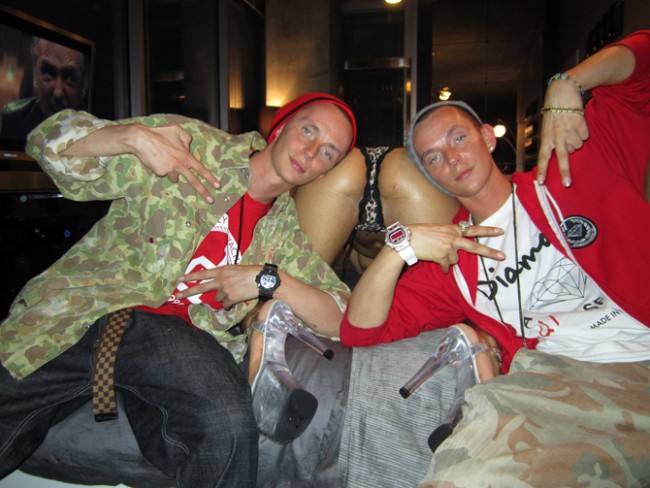 READ MORE | ATL Twins aren’t homophobic, just douchebags This is not a post about the gay fascination with twincest. It is about how Atlanta twins Sidney and Thurman Sewell prove that, when given a platform, creepy jerks use it to prove beyond a shadow of a doubt that they are anti-gay, misogynistic creepy jerks. The ATL Twins get their 15 minutes thanks to a profile by Vice. Let’s set the mood.

The short of it is they share the same bed, wear matching outfits, only fuck the same girls, were both engaged to the same Penthouse Pet, and are both looking forward to marrying the same woman and fathering the same child. The long of it is they are the most unique twins I’ve ever come across and a psychologist’s wet dream. I plan on flying back to Atlanta very soon to shoot a documentary on them. They are so amazing and their story is so tweaked, that this interview was only able to scratch the surface.

On their first sexual encounter:

She was 21 years old and we were 13! Needless to say we fucked the shit out of her, raw dog, and busted inside her. That was our introduction to pussy and sharing the same girls.

On their rather large endowments:

And we have a rule: if he goes first one night, I go first the next night. Sometimes, with freaky ass bitches, we DP them. But we got big ass dicks, man. Girls don’t want this in their ass. We’re both blessed with 9-inch cocks. Bitches love us because we know how to fuck.

On sleeping in the same bed:

From that moment on, we grew up so close that we never split up. And it was always one bitch for the two of us. We share everything—we even sleep in the same bed. We’re the same person, we just have two different bodies.

On being mirror twins:

Our dream is to get a reality show. We’re not scared, dawg. Bring it on. I’ll show you how we do. You live once, I want to do it big. I want to be famous. You ain’t seen no twins like us. Fuck you other twins. We’re mirror twins. He’s right handed and I’m left handed. We got the same tats on opposite arms. Mirror twins are the ultimate twins. Fuck all you other twins.

And the creepiest thing that The ATL Twins offer up: