‘That Vintage Guy’ Nick Battaglia queers the past for fresh looks 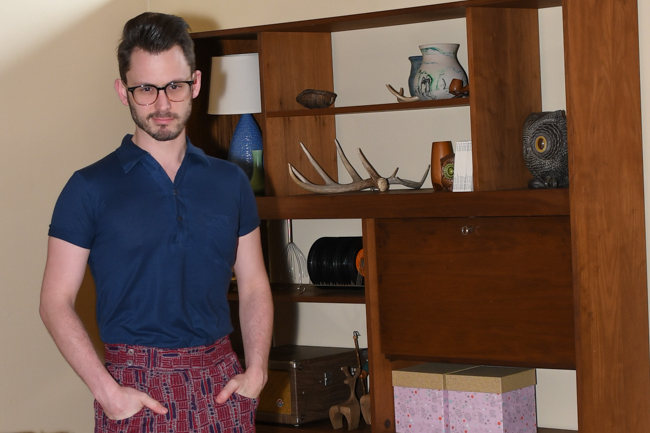 Gay Atlanta native Nick Battaglia is an actor and freelance designer, but he’s gaining popularity for his alter ego — That Vintage Guy.

You can find fabulously curated vintage housewares, as well as men’s and women’s clothing, at ThatVintageGuy.com, and his Instagram page is a must-follow.

Battaglia talks with Q about his vintage life, his most treasured item of clothing, and his burning desire to create.

What started your love of vintage stuff?

I grew up watching so many old movies and television shows that left a very lasting impression. Movies like Marnie, The Man Who Knew Too Much, Pillow Talk,Breakfast at Tiffany's, How to Succeed in Business Without Really Trying, The Thin Manseries, plus so many more really influenced me as a child. I remember seeing their everyday objects, their clothing, their hair, their furniture, their architecture, and I always thought how it was so much more intriguing than anything I had seen in the world around me at the time.

When I was 10 years old, my mother would take me to the Lakewood Antiques Market back when it was at the old Fairgrounds, and I looked in awe at the pieces. I was 11 when I bought my very first piece. I saved up the $20 to purchase an 8mm Kodak Brownie Movie Camera still in its original packaging from a vendor at Lakewood.

What is it about the Midcentury period that interests you?

As Amanda Hallay of [the YouTube channel] Ultimate Fashion History says, “Fashion is not an island, it's a response.” The ‘40s to the ‘60s is such an incredibly massive and rapid time of growth for art and style. I am so fascinated to see how everyday objects and pieces of clothing were responses to the political and social climate of each decade; things like the New Look of the late ‘40s, the Space Race that created atomic design in the ‘50s and the heightened awareness of liberation in the ‘60s.

Where do you find the pieces that you sell?

When my grandmother passed away, I inherited her beaver collar coat. My grandmother and her two sisters came to this country from France, two years after surviving the bombing of Marseille in 1944. When the Cold War began and the threat of the H-bomb was going on, one of her sisters had made the coat with massive pockets hidden throughout the lining. It was designed to hold passports, money, valuables and anything else they might need if they were forced to flee or survive another bombing. It is something I will absolutely never part with.

What would you do if you couldn’t create?

Something like that is unimaginable to me. I've spent most of my life creating, whether it be performing, designing props, styling vintage shoots or cooking. A few years ago, I almost lost my focus on creativity to manage a restaurant, which nearly killed me with its unpaid overtime and blissfully ignorant owner.

After that, I made a promise to myself that I would never sacrifice my happiness and creativity for anyone or anything ever again.

This interview originally appeared in Q magazine. Read the full issue below.

Pick up a new edition of Q magazine each week at queer and allied venues across Atlanta, and read fresh content daily here at theQatl.com.