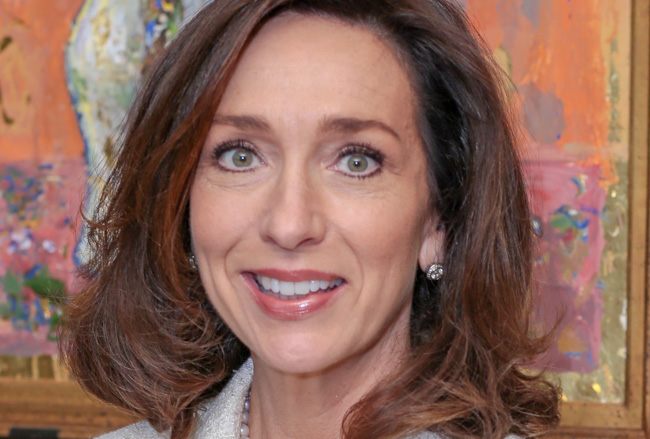 When former Columbus Mayor Teresa Tomlinson officially launched her campaign for U.S. Senate on May 1, it was a long time coming for the LGBTQ ally.

Tomlinson (photo) was in a holding pattern until Stacey Abrams, the former Democratic nominee for governor in 2018, announced she would pass on running for the seat. Abrams likely would have cleared the Democratic field if she entered the race. The winner of the Democratic primary will face Sen. David Perdue in 2020.

Tomlinson said “it feels great” to officially be off and running.

“We’ve been looking at this race for about 14 months,” she told Project Q Atlanta. “We’ve been very anxious to get going. The response has been phenomenal, as shown by the early reports of us raising $300,000 on the first day.”

Tomlinson, an Atlanta native, has a close connection to LGBTQ Georgia — her sister Tonya is a lesbian.

“People will say, ‘When did you know?’ and I say, ‘I don’t know, when I was 2?’” Tomlinson said. “I grew up with that and I grew up with a family that celebrated us all and celebrated her.”

“I think one of the reasons why I’ve taken on human equality and basic human respect as an issue all of these years is because it pains me to think others didn’t have that support and that celebration of their lives,” she added.

Tomlinson grew up in Brookhaven, attended Emory Law School and moved to Columbus in 1994 for a job practicing complex civil litigation. She became executive director of MidTown, a non-profit community renewal organization, in 2006 and was elected the first female mayor of Columbus in 2010.

She was a Republican until her early 20s and worked on the Reagan-Bush campaign in 1984. But she realized the party’s platform no longer matched up with her views during a GOP strategists’ training session after the election.

During one exercise, a group of participants said that the best way to come back if your candidate was behind was to say that the opponent is gay.

“There was wild applause,” Tomlinson said. “My hand shot up and I was like, don’t we think that this is the pandora’s box of politics? That this is a gross defiance of basic humanity, and why are we clapping for this?”

“Everybody just looked at me like I was a Martian,” she added.

“[Republicans] would use whatever — race, sexual orientation, ethnicity — to stoke voter turnout,” Tomlinson said. “The cynicism of that repulsed me and I couldn’t be a part of that.”

'A work in progress' in Columbus

Tomlinson was an early supporter of same-sex marriage. When an amendment banning the practice was added to the Georgia ballot in 2004, she wrote a letter to the editor of the Columbus Ledger-Enquirer.

In it, she wrote that elected officials who voted in favor of the amendment “are bigots or are pandering to them.”

“And those who vote for the anti-gay amendment in November will be participating in bigotry, too,” she wrote. “History will record this bigotry toward gay Americans precisely as it has recorded persecution of blacks, women and Jews.”

The ban passed with 76 percent of the vote, but was overturned when the U.S. Supreme Court ruled for marriage equality in 2015.

Tomlinson was also one of four Georgia mayors to join Mayors for the Freedom to Marry in 2013.

When she took office in 2011, Tomlinson said she was the first mayor to issue a proclamation declaring LGBTQ Day in Columbus. She sponsored LGBTQ Day and the Pride parade every year in office until she finished her second term in January.

The Human Rights Campaign began including Columbus on its annual Municipal Equality Index in 2013, when the city scored a 20. The score rose to 36 by 2018, ranking Columbus fourth out of 10 Georgia cities on the list.

The city lost points for not having a non-discrimination ordinance protecting LGBTQ people in employment, housing or public accommodations, not having an LGBTQ liaison in the police department and not reporting hate crime statistics to the FBI.

Tomlinson said they were recording hate crime statistics, but that they weren’t being submitted to the FBI. She said they did have an LGBTQ liaison on the city level, but not in the police department, so they added that position before she left office. If those changes are reflected on the 2019 index, it would move Columbus up to second on the list behind Atlanta.

Tomlinson said the city does have protections for LGBTQ city employees, and that the city under new Mayor Skip Henderson is working on adding protections in housing and public accommodations.

Tomlinson said as a senator she would vote for the Equality Act, which would add sexual orientation and gender identity as protected classes to the Civil Rights Act of 1964.

“It’s high time and it must be done because we’ve seen too many states lag behind,” she said. “Even though the polling is high for equality and tolerance, for some reason the power structure lags behind.”

The bill is expected to pass in the U.S. House on Friday and would move to the Senate for consideration. Perdue is unlikely to vote for it.

Tomlinson said Perdue “stood by silent” while the Trump administration banned transgender troops in the military. She noted that she holds a National Security Clearance from the Department of Defense due to Fort Benning’s proximity to Columbus.

“The military is quite tolerant of soldiers who serve,” she said. “If they’re willing to go into the line of fire, the rest is irrelevant to them.”

“There’s a tolerance [in the military] that is antithetical to what the current administration is doing related to transgender people, related to gays and lesbians, related to all people,” she added.

Tomlinson called it “unacceptable” for Secretary of Education Betsy DeVos to rescind Obama-era guidance protecting transgender students. And she criticized the Trump administration for instituting a rule that allows health workers to deny services to people based on their religious beliefs.

Tomlinson attended the HRC Atlanta dinner on May 4. She will be the keynote speaker at Georgia Equality’s Evening for Equality gala on June 15.

Sarah Riggs Amico and Jon Ossoff are both considering running in the Democratic primary, according to the AJC. Ossoff lost the race for the 6th Congressional District in 2017 and Amico lost a race for lieutenant governor in 2018.

MarcKeith DeJesus is also running in the Democratic primary. The out candidate lost a race for state House in 2016 and state Senate in 2018.