Embattled YouthPride Executive Director Terence McPhaul, upset with media coverage of his claims to be a therapist to celebrities and a chemist who battles oil spills, did what he does quite often: Threatened legal action.

A few hours after we published this post on Wednesday — Ridiculousness of Terence McPhaul hits new low — McPhaul called our office and left a voice mail. His concern? Not defending his claims to be a therapist to the stars with offices in cities across the globe. Not to take exception to his claims of founding “revenue behemoth” Psychology Television Network. After all, those are all things he said in a 2006 video or were written by him to promote his self-published books.

And no matter that WABE offered its own takedown of the video in a story that aired Thursday. Reporter Jim Burress tries to find some of McPhaul’s eight global offices and comes across just one – in an Atlanta loft.

But McPhaul, who also serves on the LGBT advisory board for Atlanta police, called us to request contact information for our legal rep so he can take action against us for the post.

“I did get a chance to review and I think it is time that I take more serious action,” McPhaul said. (Listen to the entire message in the video above; McPhaul’s phone number was edited out of the clip.) 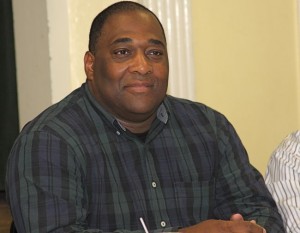 Suing is something McPhaul does often. In fact, he did so just last month when he filed a $1 million lawsuit against an Atlanta Mercedes dealership, according to the GA Voice. Some 11 days before that, the GA Voice reports, he sued the church that leases a building to house YouthPride to counter the non-profit’s eviction and $40,000 in back rent.

Litigious much? Why yes he is. He’s filed at least six other lawsuits since 1994, including three in federal court since he’s been executive director at YouthPride. The GA Voice provides a thorough takedown of each and every one, including a $10 million lawsuit against AID Atlanta, others against former employers and his alma mater, and a $2.5 billion one against Delphi.

A federal judge was so nonplussed about one of McPhaul’s legal claims that he said it “fails on so many levels that it is difficult to know where to begin.”

McPhaul’s voice mail prompted us to ring him back for an explanation.

“That means that you have crossed the line this time and I really have to do something about that,” McPhaul said.

Crossed what line, exactly? After all, it’s you in the video saying those things.

“There are certain characterizations that are off base and I intend to address them in the appropriate channels,” he said.

McPhaul then plays the race card, alleging that media coverage of YouthPride, him personally and the lawsuits he files are attacks motivated by racial prejudice.

“The bottom line is that it paints a different picture than it should have painted and as an African-American male, I have no choice but to defend myself,” he said.

When asked how it’s racist for the GA Voice to report on lawsuits that he filed and that are publicly-accessible documents, McPhaul continued to say that the coverage is motivated by racial prejudice.

And, as he has done in the past, McPhaul went on to blame YouthPride’s problems on someone else.

“I didn’t have any problems before I was abandoned by the YouthPride board,” McPhaul said. “I am not one of the board members that left. I am not the person who is to blame for that. I am staying there to fix what was done.”