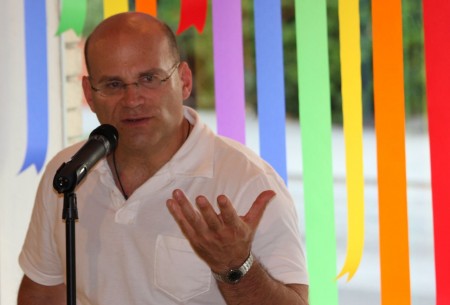 Joseph Olshan, the award-winning novelist who enjoys a good crime story, stopped into Outwrite Bookstore & Coffeehouse on Wednesday to discuss his latest work, “The Conversion.” The book’s main character, Russell Todaro, is a a Jewish gay man in Paris to take stock of his life and goals. He becomes embroiled in the death and ensuing scandal of a former lover.

Olshan has crafted eight novels and said Wednesday that he’s working on a ninth. Olshan’s other novels include “Nightswimmer” and “Vanitas,” as well as “The Waterline,” “A Warmer Season,” “The Sound of Heaven,” and In “Clara’s Hands,” a sequel to his acclaimed first novel, “Clara’s Heart.” The books often include gay themes.