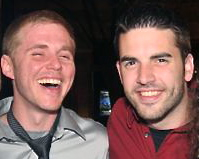 The party boys in charge of the semi-regular TakeOver Atlanta events sniffed an opportunity: entice concertgoers from Kylie Minogue’s appearance at the Fox over to The Livingston for a victory lap.

True, they didn’t need much enticing. The big gay crowd was so pumped after the show that they merrily hustled across the street to the lounge inside the Georgian Terrace Hotel for cocktails, DJ beats and general basking in the Kylie experience.

The bar boasts pretty swanky digs, including outdoor balconies and lounge areas, and the crowd took full advantage. Even folks who didn’t make the show met friends at The Livingston just to brush up against those who encountered gay icon greatness.

TakeOver Atlanta hosts Adam Ellis, Ken Folds, Mark Gathen and Ryan Hughes and their friends have been known to take over places like Bar Eleven at the Loew’s Hotel (photos) and Aurum Lounge (photos) and other venues with a vengeance, and the Kylie afterparty was no exception to their standard of revelry.

The AJC review of the concert itself kicks off with the phrase “Gladiators with bulging biceps,” and even some of Kylie’s crew and backup dancers graced the TakeOver event. AtlantaBoy reports that Minogue texted one of her bicep gladiator boys during the party while resting up for the next stop on her Aphrodite Live Tour.

“Looks like a fun party across the street my party is in my bed,” the text reportedly said.

Other cities’ videos include the local audience and clips from the show, but not so for inside the Fox. The crew improvised, mixing shots outside venue, in Piedmont Park and other iconic sites with comments from Kylie’s dressing room.

“When you come to a venue that is historic, I’m not surprised that it might be haunted,” Minogue says in the video below.