Take a peek inside Woofs’ new home in 20 photos 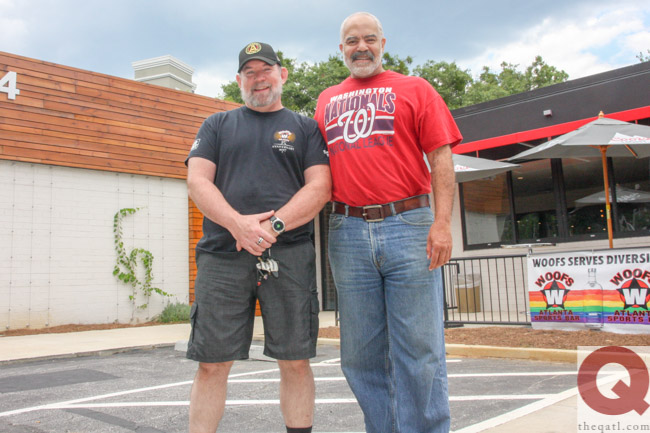 Woofs owners, employees and patrons are settling into the popular gay sports bar’s new digs a mile south of their former home.

The bar closed its old Piedmont Road location on June 23 and opened less than three weeks later at 494 Plasters Avenue, which is off Monroe Drive and not far from the retail and restaurant district Armour Yards.

Employees are getting familiar with the new location, according to owner Gregory Hughes.

“Everything was brand new and everybody had to get adjusted,” he told Project Q Atlanta.

But customers are giving a thumbs up so far.

“The good thing has been that we’ve gotten a lot of positive feedback from the customers who’ve come in and said they like the space, they’ve enjoyed it,” said Hughes (top photo right, with general manager Mike Langan). “A lot of comments about our food being better. We got new equipment, but we also raised the quality of the equipment.”

“We’ve had a lot of return business. Everything’s new so everybody wants to come in and see it, but one thing that makes you really look at things is when you see people return,” he added.

There are two separate entrances to pull into, one in the front of the bar with about 10 parking spaces and another on the left side of the building with about 30-35 spaces. There’s also street parking a block or two south of the bar just after Marquis Midtown District apartments.

“People are learning where they can go to park,” Hughes said.

A temporary sign is up for now, but Hughes said a permanent one is coming soon. And smokers, you now have an outdoor patio on which to light up.

Below is the view when you walk in the door. Notice the same bar stools and flags that made it over from the old location. Plus, TVs everywhere you look.

“We have 12 more TVs than we did at the old place,” Hughes said.

The front section of the bar has a few tables, plus a tall, narrow table without seating.

“This was designed to be where, especially on busy nights, people can just come and stand with their drinks,” Hughes said. “They’re probably not here for dinner but they’re here to hang out with friends. You can eat here, but it’s a little higher than the bar so it’s mainly more of a hangout spot than anything.”

This is bear country, y’all.

The flags line the left and right sides of the bar.

Another angle of the bar. There’s also a section in the back (far right side of the photo below) with more tables.

“More people have been hanging back in the back than the front, which we were kind of surprised about,” Hughes said. “If push comes to shove, we can always make some changes and move [the tall, narrow table up front] to the back and move more tables up front.”

“We’re letting the customers figure out where they want to go and playing it by ear,” he added.

Customers can buy official Woofs mugs with their names engraved on them. The mugs will be there waiting for them at the bar, and they’ll get discounted beer.

Longtime Woofs patrons might recognize the frame around a large mirror in the back of the bar — it came from the mirror at the old location.

“We left the mirror and took the frame off. And on our last day at the old location, we let the customers sign it and put what year they first started coming to Woofs,” Hughes said. “The employees also signed it. Then we put a new mirror up and put the frame around it.”

A hallway leads to the bathrooms and emergency exit in the back.

Yep, we went in the bathroom. It’s larger and cleaner than the bathrooms at the old location. And Hughes said less men are using the women’s bathroom at the new place.

“I hate to say it but that used to be a problem at the old place,” he said.

Woofs staff hard at work in the kitchen, which is much larger and has new and better equipment.

Bellying up to the bar.