Take a peek inside LGBTQ-owned JenChan’s in 16 photos 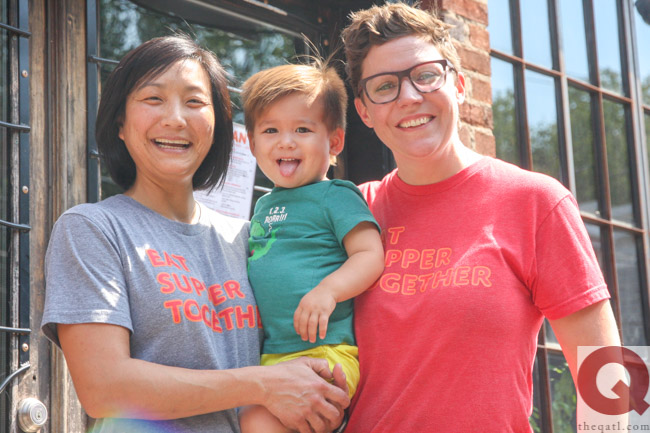 “Every dinner seems to be a record over the last, which is all you could hope for,” Emily (photo right) told Project Q Atlanta during a rare quiet moment in-between lunch and dinner service. “We’ve been picking up a lot of catering so we’re kind of slowly launching a catering program.”

The restaurant is an expansion of the couple’s supper delivery club, which they started in January.

JenChan’s, which took over the former Mouth of the South space on Carroll Street in Cabbagetown, has seating for 50.

Both Jen (photo left) and Emily were raised in families in the restaurant business, so it’s a full-circle moment for the couple and their infant son, Mik (photo middle).

“Oh he’s going to start learning how to do those dishes real soon,” Emily said, laughing.

Take a tour of JenChan’s below, and check out our other photo essays on Charis’ new Decatur home, Woofs’ new Plasters Avenue spot and MetroFresh’s second Midtown location.

The view when you walk through the door.

“We’re starting with this pretty Asian menu, but all of our chefs are going to start featuring their specials,” Emily said. “Look for our menu to change frequently.”

“That is the most popular table for people to come in and eat,” Emily said.

“These are all of our market items,” Emily said. “We make it fresh and immediately freeze it.”

Items from local businesses are also featured in the market area, including jams from Emily G's in Dunwoody.

JenChan's gets all its meat from Hunter Cattle Co., which is based in Brooklet, Ga.

A JenChan's team member at work making a spring roll. Some 18 new jobs were created by the opening of the restaurant, according to Emily.

“This is probably our most popular section ever,” Emily said. “We have parents come up and just say ‘Thank you so much,’ because they get to sit right here and their child gets to play right behind them and they can eat and drink their wine and have a good time.”

More seating available at the bar.

“This is all of our packaging for the supper club,” Emily said. “We ship our suppers to all of Georgia.”

“It’s pretty much family seating here,” Emily said. “So expect to sit next to your neighbor or someone you may not know.”