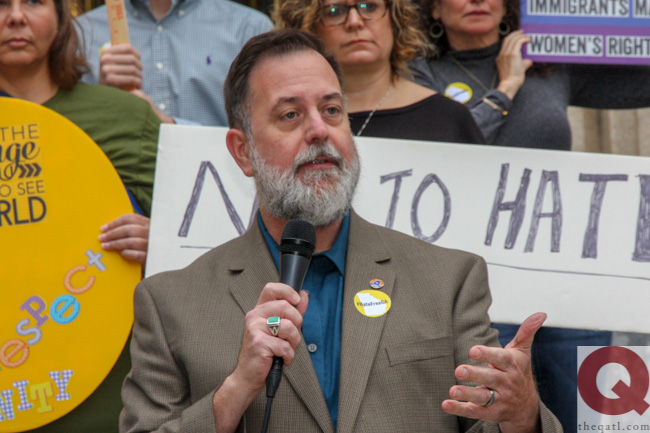 Faith and community leaders gathered at Atlanta City Hall on Thursday to call on candidates and elected officials to denounce white supremacy in the wake of a shooting at a Pittsburgh synagogue that left 11 dead.

“We are here to speak with one voice that we oppose all forms of hate and that we profess to deal with people in love,” said Harold Kirtz, president of the Jewish Community Relations Council of Atlanta.

Kirtz – pointing to the Oct. 27 shooting at the Tree of Life synagogue and the Oct. 24 shooting of two African-Americans at a Kroger in Kentucky – said, “they were targeted for who they are.”

“Whether you are a Jew, a Christian, a Muslim; male or female; black, white, brown, yellow or red; straight or LGBTQ; you deserve the respect of all and the protection of this country,” he added.

Several speakers called on the Georgia legislature to pass a hate crimes law. Georgia is one of only five states without such a law.

“The impact of hate crimes reverberates well past the individual victims and leaves entire communities scared, isolated, angry and terrorized,” said Robert Wittenstein, who serves on the regional board of the Anti-Defamation League. “We urge Georgia legislators to pass a hate crimes law this upcoming session.”

“Georgia is better than this. It is time to show all Georgians and the nation that we take people’s identities seriously and protect them,” he added.

The Georgia legislature passed a hate crimes bill in 2000, but the state Supreme Court struck it down as “unconstitutionally vague” in 2004. Numerous attempts have been made since to pass such a bill.

State Rep. Derrick Jackson, who represents House District 64 in Tyrone, was in the crowd watching the rally.

“It’s going to take courage on both sides. It’s going to take political courage,” he said when asked what it would take for lawmakers to pass a hate crimes law. “If we don’t, based on the political theater that we are in today, something bad is going to continue to happen. It’s going to require both us as Democrats and Republicans to say enough is enough. This is the right thing to do, not just for Georgians, but to be a beacon of light to say we have to pass hate crimes legislation for the state of Georgia.”