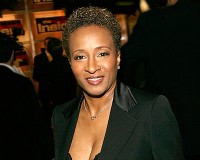 If you want to see a lesbian comic tonight, your options just got trimmed to one: Wanda Sykes (photo) has canceled, citing food poisoning.

That leaves Amy Tee, who performs at Bellissima at 9 p.m.

Sykes, scheduled for four performances Thursday and Friday at Uptown Comedy Club, is apparently ill and unable to make the trip to Atlanta.

Co-owner Gary Abdo said he heard today from her agent that she was ill and couldn’t fly cross country for the show.

“We’re disappointed,” he said. “We were really looking forward to having her here. Uptown always tries to provide the best comedy shows. She was at the top of the list.”