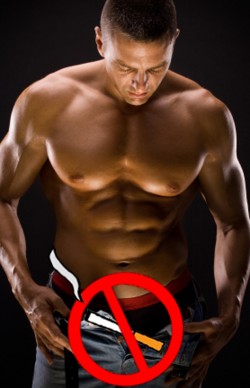 Mention “smoking” and “gay bar” in the same sentence and you’re likely to ignite a firestorm of controversy among Atlanta’s nightlife queens. Some love to smoke in a bar as much as others love to bitch about those who do. Enter Swinging Richards.

Yes, the bar known for baring its man parts – and the fave Atlanta stop of gay funnyman Leslie Jordan – cleared the smoke from its Northside Drive den of nekkid and joined the small but growing list of gay bars willing to ban smoking – at least for one night a week.

Requests from customers led the strip bar to recently launch its smoke-free Wednesdays, upgrade its ventilation system with Smoke Eaters and fall in line with the likes of other smokeless LGBT nightspots, including Cockpit, Mixx Atlanta and Bellissima.

“While the majority of our clients have made it clear they’d prefer to have the option to smoke, we understand there are some people who either want or need a smoke-free environment,” manager Matt Colunga says. “That’s a great thing about Atlanta. It’s one of the few remaining major cities that puts that decision in the hands of the individual businesses, and lets them create a solution that suits their customers.”

So on Wednesdays, smoking queens, take your cigarettes to the patio and puff away while the rest of us enjoy a smoke-free view of the, ahem, butts in our faces.

The bar has been on a bit of a publicity blitz of late. They provided the hunk factor for the debut of Man Hot Thursdays last month at Jungle, added to the ablicious factor for a pool party fundraiser by the Atlanta Gay Men’s Chorus and are supporting the Atlanta Titans of the Hotlanta Softball League with a car wash on Sept. 18. We still haven’t been able to scrub the memories of those soapy, wet, muscular dancers from last year’s car-wash-a-thon fundraiser.