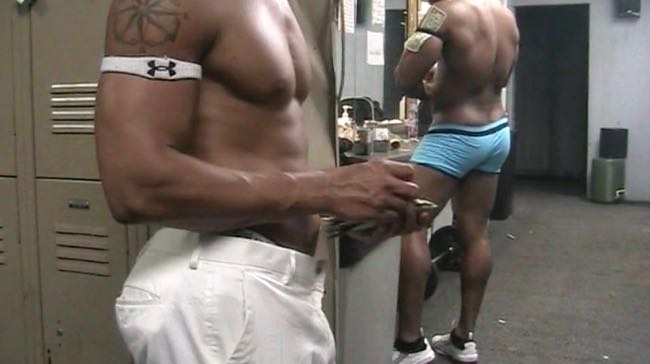 The dancers of Swinging Richards have been baring it all for gay Atlanta audiences for years. Now, they’re about to show what they’ve got on screen – beyond the hot bodies.

“All Male, All Nude” is a look inside Swinging Richards from director and Atlanta native Gerald McCullouch. The film brings what Atlantans have loved for years about the gay strip club – including, yes, the fully naked men – and also takes a look at the people who make the club what it is.

The multi-talented McCullouch, known as much for his recurring role on “CSI: Crime Scene Investigation” as for his role in the “BearCity” movies, has spent years putting together “All Male, All Nude,” his first documentary feature. It’s a passion project for McCullouch, whose years-long process making the film has included making room for the “BearCity” and his feature directing debut, “Daddy.”

Since the film takes place in Atlanta, McCullouch (second photo) has partnered with Out on Film to host its premiere on Saturday at Landmark Midtown Art Cinema. While working to put the finishing touches on the film, McCullouch spoke with us about his inspiration for the project, the years he spent putting it together, and the thing you’ll see a lot of in his work.

What’s 'All Male, All Nude' about?

“All Male, All Nude” is a project of mine that I’ve been working on for about five or six years, as all these other things have come and gone from my life. And it’s the story of America’s only all male, all nude gay strip club, located in the heart of the Bible belt, Atlanta, and this unique family unit it engenders.

When my very first film, “The Moment After,” played here at the Atlanta Film Festival, that night of the screening in Atlanta my sister and some friends from high school took me to Swinging Richards. I’d never been before. And that night, I met a guy named Steven Marchi. He became a very good friend of mine, and through him I fell into this unique world, and as a filmmaker, I thought, “There’s something here.” Six years later, I’ve finally uncovered that. It took a while. (Laughs)

How much of that time was spent shooting the film, versus pre-production or post-production?

Most of it is post-production. Unlike narrative, where there’s a script laid out – “Oh, this is what I’ve got, and this is what I have to get” – documentaries, I’ve learned as a filmmaker, is that I get as much film content as I can for as long as I can, and then go through that time and time and time again to see what story it reveals. And a lot of my insight into the club and the people I follow, a lot of that was influenced by my friendship with Steven. I think hearing him talk about what he does and his outlook on life, I think it’s an intriguing story set within this very unique environment.

What is the approach of the film – what Atlantans have seen over the years? Or more of a behind-the-scenes look?

You’ve been to that club, I’ve been to that club; it’s amazing. It’s a celebration of life and freedom and sexuality and masculinity. It was important that, from the first frame of this film, you think, “Oh, I am in the world of this club.” So I have this amazing soundtrack that I am so happy with – an amazing musician, Corey TuT, has donated his music to all three of my films, so it’s great that it’s in there – but it’s amazing and I think that the sound design and the look and the feel of the film hopefully supports what peoples’ experiences are when they go in the club.

Just how rare is a club like Swinging Richards?

They say you pick subjects you’re interested in as a filmmaker, so I figured I’d just sit there and stare at dick for four months. 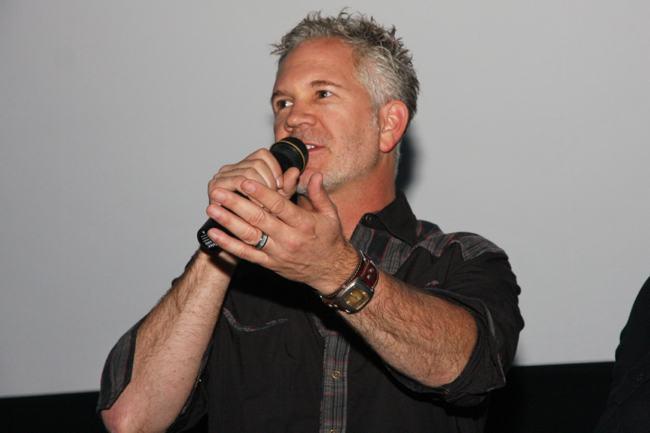 How did the Atlanta premiere come together?

So knowing that “All Male, All Nude” was the next project on my slate, it’s an amazing kind of coincidence that Out on Film happens to be in Atlanta, which happens to be the location of my next film, and it seemed like a perfect marriage. I pitched the idea to them. I said, “Why don’t I give you guys a special premiere here in Atlanta, before it starts the festivals?” And it just seemed really appropriate.

I’m back in Atlanta now, finishing up this film, so a few of my dancers will be coming, and my crew will be coming, my creative team will be coming. We’ll be screening it in Atlanta, which is, you know, kind of the audience for this specific club. And this movie’s kind of become my love song to Atlanta, in a way. This is a city I have an emotional connection to, and I get to illustrate that as a filmmaker a little bit. I get to give props to Atlanta. That makes me happy. Also, for the film to premiere in the city of its location, and the city I feel is the home of this movie. It’s an amazing experience, and I’m so thankful to Out on Film for making this happen. It wouldn’t be happening without them, and their support is so appreciated, and I think that it’s such a fun celebration of Atlanta, for them to sponsor and host.

What are your plans for the film after the premiere?

Beyond 'All Male, All Nude,' what else is going on with your career?

I have kind of a full plate, which I love. It’s crazy – I shot this film six years ago, and I was down here getting my content, that’s when I was offered the first “BearCity” film, and I initially passed on the first film because of this film here. I was like, “I’ve gotta finish this,” and oddly enough, “BearCity” became this huge thing in my life, and after I finished filming the first “BearCity,” which is what kept me from “All Male, All Nude,” I was cast in the play for the New York premiere of “Daddy,” the play that became my directorial debut. So both “BearCity” and “Daddy” kind of unexpectedly came into my life, and took me on this amazing six-year-long journey, going back and forth between doing “Daddy” in New York and L.A., making the film, and doing the three “BearCity” films. So I’ve been on this crazy tangent of a career as a filmmaker, and it’s nice to get back to it.

Just like “Daddy,” which came into my life as a play in New York I was cast in, I was also cast in a play called ” Moonlight & Love Songs” in New York, in one of my other career tangents, and that play I optioned, and it’s going to become my next narrative feature that I direct. On top of that, I was lucky enough to spend two months in Greece this year, when “Daddy” premiered over there, and as a documentary filmmaker, I got a lot of content about the LGBT refugee crisis happening in Greece. I hope that’s a documentary I’m able to wrap up in the next year or so, as well.

“All Male, All Nude” premieres April 1 at Landmark Midtown Art Cinema. VIP all-access tickets also include a private party at Après Diem at 5 p.m., a reception with McCullouch and other members of the film’s cast and crew, and an after party at – where else? – Swinging Richards.