Swimmers strip down to deliver pizza 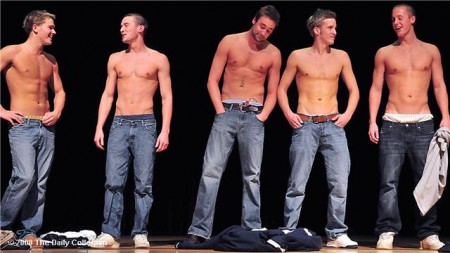 The next time the Atlanta Rainbow Trout is considering a fundraiser, the gay swim group might do well to go the route of the Penn State swim team.

A few swim jocks from the school joined others from the ice hockey team in a recent charity auction. To heat up the bidding, they stripped off their shirts. And to top it off, the five college athletes (photo) offered to deliver pizza sans shirts.

After enduring chants of “take it off!” for several minutes, the five swim team members removed their shirts one by one.

The prize, eventually selling for $235, was a special pizza delivery from the men — wearing nothing but Speedos.

(Hat tip to Outsports’ Jock Talk Blog for the item.)