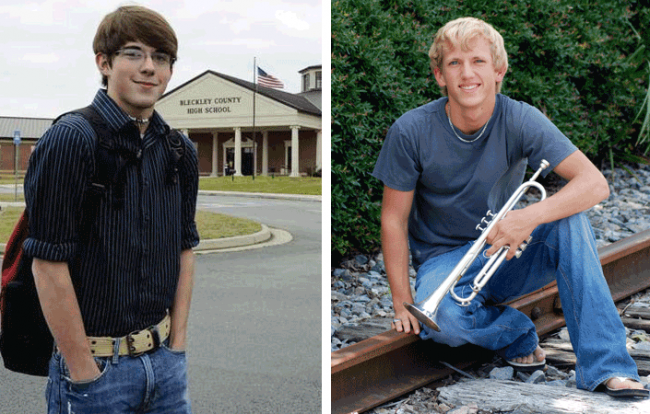 Support continues to grow for Derrick Martin, a Cochran, Ga., teen who was kicked out of his home this week after a crush of media attention when he gained approval from his high school to bring his boyfriend to the prom.

Martin (photo left) is receiving offers from across the country to help him financially, provide security and a limo for the prom and words of encouragement through two Facebook pages that have been created in recent days. The first page, We support Derrick Martin taking his boyfriend to the prom, jumped from more than 400 fans on Wednesday to nearly 2,600 by Thursday morning. A second page, Support Derrick Martin, had 427 members on Thursday.

Supporters also established a PayPal account for Martin to collect donations. The honor student, who is living with a friend since his parents ousted him from their home, says he’s “really tired” in a Facebook posting made through PFLAG of Macon.

Hello all! I keep getting more and more messages asking how people can help me in any way. I’ve been asked questions from; “can I pay for security”, to “can I donate just a small amount?”. I’m really REALLY tired, so excuse any random typo’s or ramblings. I’ll keep it short and sweet. In order to make it easier on myse…lf, and on anyone who feels like they want/need to help me out, I have made a paypal account where you can donate money. I will say this about any donation, I will be sending 25% of anything I recieve to Constance McMillen in Mississippi, and the rest will go to whatever you ask me to use it for, or for prom/housing. Thanks to everyone for just your support.

McMillen is an 18-year-old senior in Itawamba County, Miss., who challenged her school system’s decision to cancel its prom rather than allow her to bring a same-sex date. On Tuesday, a federal judge ruled that the school board violated her rights by canceling the prom, but stopped short of forcing the district to reinstate its April 2 prom.

Martin’s prom is set for April 17 in the cafeteria of Bleckley County High School. The public focus on him and the upcoming prom hasn’t deterred him or boyfriend Richard Goodman (photo right), an 18-year-old who attends Tift County High School about 85 miles south of Cochran.

“No matter what, he and I will be going to prom, and we will have the best time of our senior year,” Goodman told LGBTQ Nation.

Since Martin’s story hit the national news, gay rights supporters have been lavishing attention on him, offering to pay for his tuxedo, boutonnieres, dinner, and one website was soliciting donations to rent a stretch limo to transport the teens to and from the prom.

Goodman, 18, attends Tift County High School in Tifton, about 85 miles south of Cochran. The two met through Facebook and a mutual friend, and have been dating about 8 months, the teen couple confirmed.

“My mother is a little worried about me going to prom because it is getting so much attention, but I assured her I will be OK,” added Goodman.