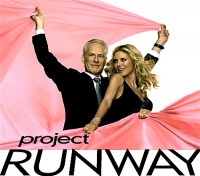 Thursday’s premiere of “Project Runway” Season 8 comes just as you thought you were gonna die from hiatus withdrawals. In the nick of time, here’s our first look at Team Gay and a preview of a super-sized season. Producers and the Lifetime network press the “Upgrade” button for Season 8. Each episode is 90 minutes and starts an hour earlier (9 p.m. EDT). Also supersized, the contestant field starts at 17 hopefuls, and the number of gay contestants nearly doubles over last season. Before we introduce you and revel a little more deeply in the fact that Tim and Heidi (top photo) and the judges are back, we have a few details to share. First and foremost, our unfiltered opinions and distinctly queer take will again appear in our “Runway” Recaps each Friday after the episodes air. We’ll be with you all the way, come hell or bad fashion. With the memorable likes of Mychael Knight and Anthony Williams of Atlanta in our rear view mirror, Savannah resident April Johnston is your Georgia connection this year. At just 21, she is the season’s youngest contestant and a 2010 SCAD grad with a fashion degree hot off the presses. Now without further ado, let’s push our own “Upgrade” button and make it gay. Super gay. Out of nine men, seven are gay, one might as well be, and one is a conceited asshole. We’ll see if Jason Troisi proves us wrong, but the landscape designer and freelance fashionisto had us throwing darts during his pre-show interviews. He says the ladies—and he himself—like his arms. His quote: “Favorite designer? Can I say myself?” The other apparently straight guy might as well be gay. Michael Costello is obsessed with his weight, and his best friend is a drag queen that he says looks like Lady Gaga. Here is your first look at Team Gay. Click on any of them to watch videos and see their portfolios:

A.J. Thouvenot, 26 St. Louis Designer for TrashBiscuit Interesting if eclectic clothes, including day dreses with little toys on them like plastic elephants and tiny ballerinas. Quote: “I definitely design for a playful girl, who likes to have fun, likes to go out, likes to party.”

Michael Drummond, 31 St. Louis Part-time designer, freelance stylist Two words: Plastic knitwear (think scrubber sponge coverings) “I used to be insanely commited to what I was wearing, but now I feel like I put most of that energy into my work. Plus, living in St. Louis makes it hard to run around in spandex jumpsuits.”

Nicholas D’Auriizio, 32 New York City Handbag designer Dramatic, gothic-inspired clothing with impeccable tailoring. Quote: “I love playing with seams, I love trying to come up with different ways of seeing things. I’m really into the whole ‘Twilight’ thing and like, ‘Interview with a Vampire’ … capelets, exaggerated sleeves, I love all that.”

Casanova (It’s his last name, but just use the one name, and never call him Carlos), 33 Astoria, N.Y. by way of Dominican Republic Fulltime designer Cool but quirky. Weird, even. Quote: “I’m kinda the slow in English, but I will do my best. I do for singers, models, and my designs they aren’t much like sequins or bright, but I like to really pop it with color on the inside.”

Andy South, 23 Waianae, Hawaii Freelance designer and personal assistant to another designer Lots of dark fabric and simple lines make what we've seen of his work appear elegant and expensive looking. Quote: “My latest line is inspired by Asian culture, like rice patty workers, Chinese lanterns… I have a bamboo pant. I make my own jeans. I’m all about detail.”

Christopher Collins, 30 San Francisco Fulltime designer Clean lines and unusual fabric choices used in innovative ways that actually work. Imagine a stretch denim pencil skirt with a silk blouse as after-six wear. “I’m inspired by texture, shape and fit. I like to do simple and then find trim or other details that really kick it up and pop it.” Click any of the photos here for larger versions, and see all of the designers and more about the show on the official “Project Runway” page at MyLifetime.com. You can also catch up on our "Runway" recaps from each episode of Seasons 7 and 8. BONUS: A preview video of the premiere: