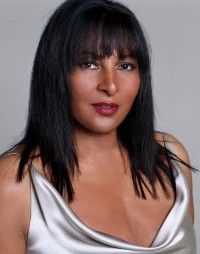 From hiding guns in her giant afro in “Foxy Brown” (second photo) to her lesbian-icon-inducing portrayal of Kit Porter on the Showtime hit “The L Word,” Grier’s eclectic career is by design, she says.

“The actor acts,” Grier says, quoting pioneering actor and director Constantin Stanislavski. “The actor works in all mediums, and I want to explore every one of them.”

Grier offers up some of what she’s learned in her 40-year career in a new memoir “Foxy: My Life in Three Acts,” which she signs at Outwrite on Wednesday. 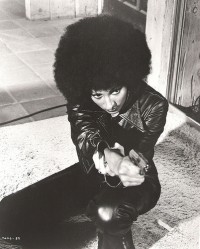 The book traces her early roles in Roger Corman’s women-in-prison B movies, through her tumultuous love affairs with Kareem Abdul-Jabbar, Freddie Prinze and Richard Pryor, to her battle with cancer.

While there are plenty of Hollywood anecdotes, Grier says she wants readers to learn more about her and how her iconic characters were formed through personal experiences.

“Studios used to want their stars to be mysterious,” she says. “Now, people want to know the person. The fan who sits in a seat and spends money at a movie theater wants to know, ‘Why should I invest in you?’”

There’s no doubt Grier is a badass, but she’s also disarmingly candid about sexual abuse she suffered as a teen and how she gave up her relationship with Abdul-Jabbar because she refused to be the subservient woman required by his Islamic beliefs. Richard Pryor’s brilliance and spiral into drug abuse – and how it might have contributed to her later cancer – makes for tough, but necessary reading.

“I learned so many lessons, and I knew I had to be as open as I could be in my firsthand account,” she said. “I wanted to show young women how I navigated through my life, and maybe help them navigate theirs.”

Readers and fans can thank “The L Word’s” Jennifer Beals and Mia Kirshner for Grier’s memoir. After hearing her stories about surviving both personal traumatic incidents and in Hollywood, they told her she simply had to write a book. 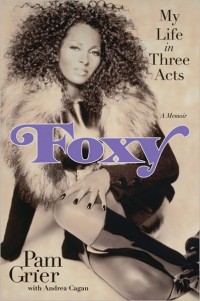 Grier says she was “completely ignorant” of the LGBT community before “The L Word” and has now become one of its greatest activists and allies.

“People have come up to me and said, ‘Because of you, I have embraced a family member who we ostracized from our family,’” Grier said. “’The L Word’ has been one of the most humbling, gratifying and greatest experiences I’ve had as an actor and a person.”

The show ended after six seasons, and Grier says there has been discussion of a movie reuniting the characters. She also says she’d love to work with Tarantino again after he re-introduced her to a new generation of movie lovers.

“I owe him at least one child,” Grier laughs.

There’s a great bit in “Foxy” (third photo) about how she let the “Jackie Brown” script sit at the post office for days because Tarantino hadn’t put enough postage on the envelope.

Grier is cancer free and continues to work at keeping healthy with yoga, Pilates and taking a variety of herbs. She just finished a movie with Tom Hanks, is shopping a comedy series idea to networks and has her fingers crossed she’ll be back for the 10th season of “Smallville,” where she plays mysterious Agent Amanda Waller.

Most of all, Grier says she’s still living her life agape (pronounced a-ga-pay), which is a spiritual term that literally means “love and wide open.”

“I opened my mind to new ideas and attitudes and ways of healing when battling cancer, and I continue to live that way,” she said. “It’s been an amazing journey, and I hope I can inspire others to do the same. I hope I can be a even a small particle in someone else’s journey.”