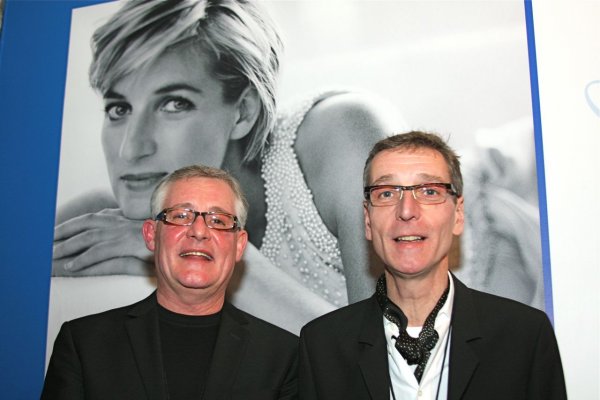 Don’t be jealous. We’ve seen the exhibit you’ve been waiting for, and by our account, “Diana: A Celebration” opens Saturday just as modest, elegant and tasteful as the late princess herself.

A red carpet worthy of a royal was certainly rolled out Thursday night for the unveiling of the exhibit that brings 150 artifacts from the life of the late Princess of Wales to the Atlanta Civic Center. Several hundred people—from local celebrities to elected officials and plenty of LGBT fans—were on hand for the VIP reception at the Atlanta Civic Center.

Also on hand were gay partners Graeme Murton and Nick Grossmark (top photo), who are the exhibit handlers. Yes, they are the guys who got to touch the most famous wedding dress in history as they unpacked and set up the show.

Not on hand was Charles Spencer, the Ninth Earl of Spencer, Diana’s brother.

Most famous worldwide for his moving eulogy to the princess, the Earl was scheduled to introduce the collection to Atlanta himself. He was called home to South Africa unexpectedly, so Murton and Grossmark did the honors of answering questions and generally having a jolly old time.

Grossmark says that the LGBT public is drawn to the princess and her memory much for the same reasons that she appealed to the rest of the world.

“We never had a royal so approachable,” he tells Project Q, noting that she was one of the first to visit hospitals for people with AIDS and embrace them. “It’s about one love, isn’t it? And she accepted people no matter their creed, color, sex—I don’t think it even entered her mind. And in that way, she really was the people’s princess.” 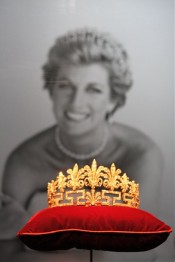 While at the exhibit, we also learned than an estimated 2.5 billion viewers watched the funeral that included the Earl’s speech heard ‘round the world. The original text for the eulogy is part of the exhibition, as is an excerpt on a plaque that visitors see as they enter the show:

“My sister was that unique phenomenon: a glamorous humanitarian.”

And oh, how that fact is on display as you round the corner into a small room with just the royal tiara in front of a photo of Diana (second photo). These guys know what they’re doing: Open with the jewels, baby.

Historic, sparkling examples of family jewels are part of the exhibit’s Spencer Women gallery. It includes portraits and a brief geneology of Diana’s influential female ancestors. You may feel you’ve seen a ghost when you look at the jewels nestled in front of the biography of Diana’s paternal grandmother, who bears a striking resemblance to the princess.

Home movies shot by Diana’s father when she was a girl play on a loop in the next gallery, which includes childhood writings, toys and personal affects that bring the legend down to earth. Linger over such humble articles as ceramic figurines, stuffed animals and a report card complete with teacher comments much like any child’s mother might still have stashed away. 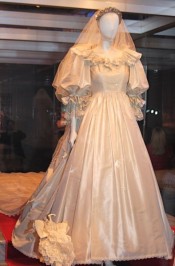 Next, step into the epicenter of the exhibit and see how the normal, private life of Lady Di changed forever the day she became a member of the British royal family. Alone in the long Wedding gallery stands the dress (third photo), in all its puffy-sleeved ‘80s glory. The 25-foot train is completely unfurled, and just a few choice photos of the wedding day hang on the walls for context.

Like the rest of the exhibit, the wedding gallery is simple and spectacular at the same time, allowing the artifacts themselves to speak for the woman and the times she helped define.

The Charity gallery includes letters to and from Diana about the work she did for AIDS, against landmines, and in the name of dozens of other worthy causes. You can also view drafts of the princess’ own speeches with her handwritten remarks. Again, the articles are relatively few, and passing through the gallery can be brief, but the experience remains emotionally compelling.

Speaking of emotions, bring a tissue for the Tribute gallery that contains a handful of photos representative of the sea of flowers that were laid down across the U.K. in her memory. As a video montage of Diana’s 1997 funeral day runs, Elton John’s “English Rose” version of “Candle in the Wind” plays.

Mark our words: the emotion of that day will flood back while you eye the handwritten lyrics of the song by Bernie Taupin and Elton’s notes on the music, as well as Charles Spencer’s eulogy, complete with corrections and notes in the margins.

Another interesting tidbit: 1 billion viewers worldwide watched the wedding, a record at the time that stood until the princess died, and 2.5 billion—hello, more than one-third of the world—tuned in for the funeral.

So, “Diana: A Celebration” may contain enough heirloom jewelry to make a drag queen faint and enough imagery to make a grown man cry, but our gayest gasp came when we entered the Style gallery. Some 28 of Diana’s most iconic gowns are on display alongside photos of her wearing them.

“We tried to choose the ones that people would recognize the most,” Grossmark says. “You should have seen the ballroom at Althorp [Diana’s ancestral home and burial place] when we were trying to choose the gowns. There weren’t just hundreds of dresses, but hundreds of racks, some never worn.”

If most of the exhibit humanizes the woman, the Style gallery (bottom photo) puts the princess back on her rightful, royal pedestal.

At the VIP reception, women were crawling over gay men to get up close and personal with designer names like Versace, LaCroix and Azagury. Diana had a particular fancy for the latter’s work. He designed some of her most stunning gowns in the gallery, including the beaded black dress that she wore during her last public appearance on her 36th birthday, 60 days before her death.

The final Condolences gallery contains a staggering number of bound memory books filled with public comments about the princess and paying respects to her family. Some of the hundreds on display are so massive that they are bound in multiple volumes.

OK, do be a bit jealous if you haven’t seen it yet. But don’t fret. The show opens to the public Saturday and runs through June 13. Tickets are available online, at every Publix supermarket, and at the Civic Center box office by calling 800-745-3000. Adult tickets are $18.50; senior, student and group rates are available.

Proceeds go to the Diana, Princess of Wales Memorial Fund benefiting communities living with the legacy of landmines, cluster bombs and other explosive remnants of war. The fund is run by the Althorp Estate, which is Diana’s 500-year old ancestral home, the permanent home of the collection, and the place where the princess is buried.