Students reveal pain of being transgender in Georgia schools 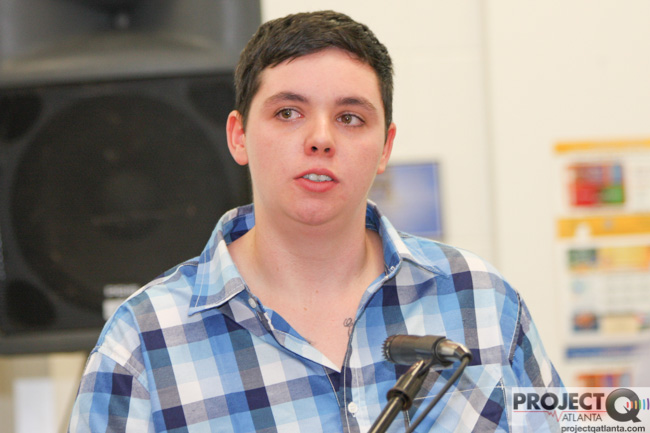 Transgender and gender nonconforming students in Georgia face barriers to their education as varied as regular bullying and beatings, teachers without a clue what it means to be transgender, and navigating school administrators uncertain how – or worse, unwilling – to provide a safe, affirming environment to learn in.

The students expressed a surprising amount of pragmatism, as schools struggled or failed to accommodate them, and they faced serious challenges in accessing safe school environments.

“I was scared to come out,” said Xavier Eaton (top photo), a 2012 graduate of Fannin County High School in Blue Ridge.

“I was pulled into the men’s restroom by a couple of guys who were much bigger than me, and they said that if I wanted to look like a guy, then they would treat me like a guy. And they beat me like three times. And it was just really horrible,” Eaton said.

Eaton told his story in May during when hundreds of parents and residents flooded a Fannin County Board of Education meeting to express their outrage over the possibility that the school system might allow transgender students to use bathrooms that match their gender identity. Eaton, in tears, described to the crowd the torment he faced at the county high school. Speaker after speaker responded by calling LGBT “perverts” and “pedophiles” and denounced them with their own religious spin.

Eaton’s story isn’t an isolated event. Transgender youth face an increased risk for bullying, harassment, and assault, according to the 2013 National School Climate report from the Gay, Lesbian & Straight Education Network. In Georgia schools, some 77 percent of LGBT students said they heard classmates make negative remarks about gender expression and 61 percent regularly heard negative remarks about transgender people, and 56 percent of students said they experienced verbal harassment based on gender expression. Nationally, the report found that more than half of LGBT students harassed at school didn’t bother to report the incidents. Why? Nearly 62 percent who did report it said school staff did nothing in response.

‘I cried in class, no one noticed though’

Andrew, a DeKalb County middle school student who asked to use only his first name to protect his privacy, faced some of his harshest moments from school staff. The school did not quickly change his name in their official records, even after a legal name change and despite repeated please. So standardized testing, attendance and report cards all brought anxiety, Andrew said.

He was brought to tears the first time a substitute teacher took attendance and called out his birth name, in front of a classmates who had no idea he is transgender.

“I cried in class, no one noticed though,” Andrew said. “The substitute, he said my [birth] name, and, you know, I didn’t respond cause, you know, that’s not my name.”

Another student corrected the teachers, telling the substitute that the name he called out was Andrew’s sister.

“In the beginning of the school year, I think it happened to him three times that substitute teachers misnamed him, and I know that he said that he broke down. He was not expecting it, it was really hurtful,” Andrew’s mom added during the interview.

Despite a meeting with school officials before the beginning of the school year to ensure a smooth, safe experience for Andrew, they were only willing to do so much. Andrew’s mom said she had to “hound [school officials] for a month and half” after getting the legal name change to get his school documents updated – nevermind the anxiety this caused for Andrew and the risk that he would be outed to other students.

Andrew also had a teacher who occasionally misgendered him and would only call him by his last name.

“I mean the class is about math, so like I should learn math and kinda not pay attention to her transphobic-ness and just try and learn,” Andrew said, putting the issue in perspective. He is, after all, at school to learn.

Being misnamed and misgendered reinforces that transgender people can only enjoy the lived experience of their gender identity if their cisgender peers find it convenient. For students like Andrew, this means navigating constant reminders from school documents or begrudging teachers of an old, ill-fitting identity. 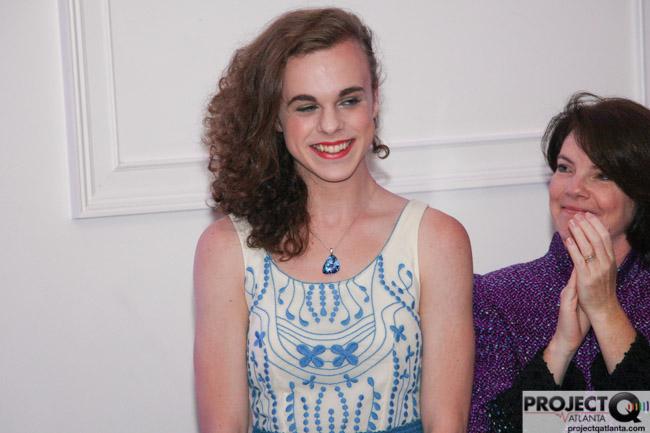 Eris Lovell (second photo) graduated in May from Walton High School in Marietta, after much media attention when she was elected to the school’s homecoming court during her junior year in 2014. Her experiences were of a school willing to be supportive, but in need of some education.

GLAAD organizers in Atlanta honored her a few weeks later.

But even at a school very willing to put trans-inclusive policies in place, it still often fell on Lovell to educate her peers, teachers and school administrators. School leaders simply didn’t know how to handle her needs. Most often, she was just talking about the basics of being transgender – her name, her identity, her pronouns.

“I was kind of the first known case in many, many of these teachers’ and faculty’s experience of having to deal with someone in my situation,” Lovell said.

“It was just … teaching people what was correct. Like the fact that I am female, [and] use she pronouns,” Lovell added.

In May, the Obama administration issued the sweeping guidelines calling for schools to allow transgender students to use the bathroom that corresponds with their gender identity. The guidelines also call for schools to provide access to all programs to transgender students, refer to them by their chosen names and pronouns, put in place safeguards to keep their gender identity private and respond to reports of harassment. The measure is not law but school districts that don’t follow it could face lawsuits or the loss of federal funds.

The guidelines set off potty wars in Georgia and were roundly denounced by state leaders and Republican lawmakers who often peppered their criticism with transphobic rhetoric and fear-mongering. But not surprisingly, the students interviewed by Project Q made one thing clear – they just want a safe place to go to the bathroom.

“I would get comments everyday about, ‘look at that dyke,’ or ‘what a faggot,’ or you know, plenty of stares when you go into the bathroom,” Eaton said, relaying stories of going into the woman’s restroom and hearing, “can you believe that that came into our bathroom?”

“I couldn’t really go into the boys bathroom either. It was hard because no one in this small community understood,” Eaton added.

He didn’t feel safe being out as a transgender man to many of his teachers, so that left him uncertain how, if at all, to report the harassment, violence and bullying.

“The teachers at Fannin were really good people, but it was more of the fact of what am I gonna say,” Eaton explained. “You know like how am I going to explain that that hurts my feelings, without having to tell them that I was transgender?”

‘So much bigotry comes from just not understanding’

Andrew faced resistance from his school over bathroom and locker rooms. At first, the school insisted he use “a separate bathroom away from other students and he won’t change in the locker rooms with anyone,” according to his mom.

Andrew’s mom contacted an assistant superintendent in the school system, the third-largest in Georgia with more than 99,000 students.

Eventually they were able to resolve the issue and create a plan that allowed Andrew to change in the boy’s locker room, but in a separated space with additional privacy.

Lovell had a fairly straightforward response when asked about the current transphobic bathroom policies state leaders are protecting.

“Really people? Like we just want to pee. Like go in, pee, wash your hands, fix your make up, walk out,” Lovell said.

Lovell added that what’s creepy and invasive is someone trying to find out if you are transgender or cisgender when you are just trying to use the restroom.

The students interviewed called for education around transgender issues and support for transgender students. None of them asked for anything big and spectacular, not for revolutionary changes to their schools, not even for the firing of teachers or administrators who put up roadblocks or made them feel unsafe and not supported.

“Definitely a big one is education is key. Cause like so much bigotry comes from just not understanding,” Lovell said.

All three students shared that transitioning made a big difference in their wellbeing.

“It’s probably been my best year in middle school, only because I am actually happy,” Andrew said.