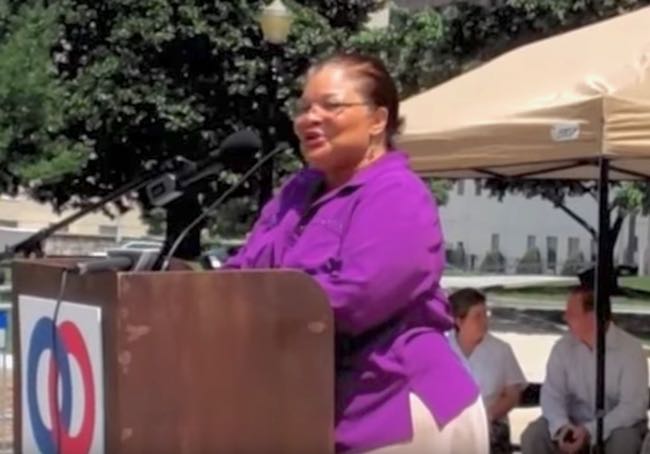 A pro-life student group filed a federal lawsuit against Georgia Tech after its student government denied funding for an on-campus appearance by “known homophobe” Alveda King.

“It is discriminatory and unconstitutional to withhold funding from student activity fees that students have already paid into simply because a group holds a pro-life, conservative, or religious belief,” according to the lawsuit.

Last September, Students for Life asked the SGA for $2,350 to pay King’s speaking fee. The SGA denied the funding and subsequent appeals for reimbursement, according to the lawsuit.

Several members of the SGA cited King’s long anti-LGBTQ history, including her comments at a 2010 Atlanta rally where she compared same-sex marriage to genocide. Minutes of the SGA meetings were attached to ADF’s lawsuit.

One member of the SGA’s House of Representatives asked Students for Life to “guarantee that [King] will not talk about LGBT issues,” according to the lawsuit.

“Dr. King is a known homophobe who has previously said things that can negatively affect the community, and we can’t censor her talk,” said another SGA House member. “I also don’t think it’s a good message to the community to say that we’re funding a speaker and that we stand behind what she says.”

One SGA House member said King has shown no remorse for her anti-LGBTQ comments.

“My concern is that if we support this bill, we’re supporting a speaker that’s said such hateful, dangerous rhetoric,” they said. “She hasn’t apologized for these beliefs either.”

A Georgia Tech spokesperson told Project Q Atlanta that the school does not comment on the specifics of pending litigation.

The lawsuit was filed on April 1 in the U.S. District Court for the Northern District of Georgia. The University System of Georgia, Georgia Tech’s Student Government Association, Georgia Tech President Angel Cabrera and several other school administrators were listed as defendants.

The University System of Georgia did not respond to Project Q’s request for comment on the lawsuit.

King is a niece of Martin Luther King, Jr.

King’s goddaughter compared LGBTQ people to pedophiles and demeaned transgender people last month as she qualified to run for a U.S. House seat in Atlanta. Angela Stanton-King later apologized and said the comments arose from her concern that LGBTQ people “sexualize children.”

UPDATE | A University System of Georgia spokesperson said they are reviewing the complaint with the state attorney general's office.

“While the University System of Georgia does not comment on pending litigation, the USG is committed to protecting the free expression rights of our students, faculty, staff and those on our campuses,” they said.