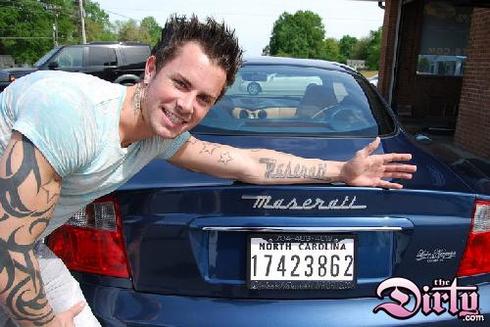 READ MORE | 9 creepy photos of that ‘faggot-hating’ stripper If you’re a go-go boy with anger management issues stripping in an Atlanta gay club, posting homophobic slurs to Facebook probably isn’t the path to better tips. But then again, you’re not Corey John Capels. Capels (photo), a dancer at Bliss Atlanta, called the cops from the club to report damage to his 2004 Maserati, a car that he loves almost as much as the women whose names are tattooed on his muscular torso. The car had been keyed and Capels told police that he suspected a bartender at the club did the damage, according to a Dec. 22 incident report from Atlanta police. It seems the bromance between Capels and the bartender had soured after several verbal altercations. The police officer asked Capels if he had any proof – seeing the bartender actually damage the Maserati, hearing that he did it from someone else and or an admission from the suspect. Nope, Capels told the officer, just a feeling way deep down in his gut somewhere between his junk and the “Kristin” tattoo above it. A manager of the club told the officer that Capels reported the damage to him, too. But when he offered to check surveillance video of the parking lot, Capels erupted. And then it got ugly.

The officer filed the incident report, but no charges. The anti-gay threats also prompted him to alert one of the LGBT liaisons for Atlanta police. Capels got a night off work to simmer down and the manager asked for a criminal trespass warrant against him “until both parties could calm down and the incident be resolved.” But the 26-year-old Capels isn’t so good at calming down. Or driving slowly. UPDATE: A manager at Bliss says Capels was terminated after the incident and no longer dances at the club. Photo via the Dirty