Stopped by the cops? Pull out a condom 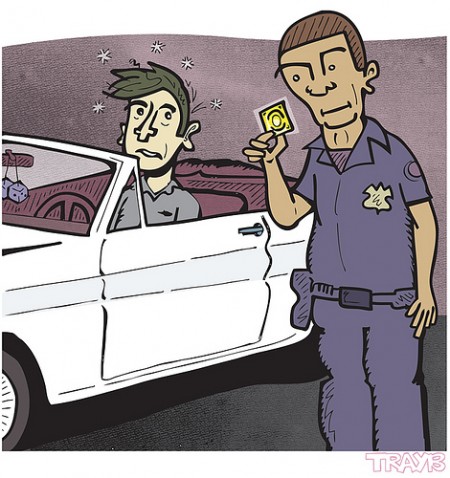 What do you do when pulled over by the police? Pull out a Trojan Magnum condom, of course.

That was the strategy employed by an allegedly drunk driver nabbed recently by Atlanta police and detailed in Creative Loafing’s weekly crime blotter.

LICENSE TO ILL? Around 2 a.m., an officer reported that a white car turned left on Hamilton E. Holmes Drive, despite a traffic sign there that reads “No Left Turn.” Eventually, the officer pulled over the car and spoke with the driver, a 28-year-old Decatur man. “I then asked [the driver] for his license, and he looked up at me and said nothing.” The driver’s eyes were extremely glossed over, the officer noted, adding that he asked the driver for his license again, and the driver reached into the glove compartment and pulled out a pair of glasses. “I then asked [the driver] again for his license and [he] went into his pocket and handed me a gold in color Magnum condom. I then told [the driver] that I did not need a contraceptive and he then gave me his license.” The man was slurring, and he smelled of alcoholic beverages, and he had a paper bracelet from a local nightclub on his wrist, the officer noted. The man denied that he had been drinking and refused to do any sobriety tests. The officer charged him with DUI. The man reportedly cursed and yelled all the way to jail. According to the police report, the man’s license had been suspended for child support obligations.

The Blotter is illustrated by gay writer and artist Tray Butler, who captured the condom moment in perfect detail.

Also included in this week’s crime wrap is the tale of two male escorts — both with purses in tow — who were busted by undercover officers when they showed up for an outcall.

TEAMWORK: An officer was working an undercover vice detail at a hotel on Buckhead Loop. “[A man] advertised on the Internet as an escort providing ‘outcalls’ with a partner,” the officer wrote. “[He] stated their fee was $400 per hour, when we spoke on the phone. [He] asked me to be nude when I came to the hotel door.” Two 20-year-old men allegedly came to the officer’s hotel room and “I declined their services and they demanded I pay them,” the officer wrote. Neither man had escort permits for the city of Atlanta. They both went to jail. One man had a gold purse, the other had a brown purse.