“I’m not missing a minute of this; it’s the revolution.” That’s what Sylvia Rivera said of the Stonewall Riots. Saturday’s Sylvia Rivera Community Brunch embraces that enthusiasm as part of the local Stonewall Week celebration.

And Rivera was right. Not just about the beginning of the revolution, but about a lot of things. 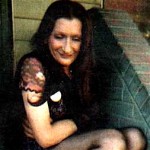 Sylvia (photos, from the 1960s through 2000) started life as Ray, a Hispanic boy who was abandoned by her father, orphaned when her mother committed suicide when she was 3 years old, and maligned by her grandmother for being an effeminate boy and wearing makeup to school in the 4th grade. Living on the street from the age of 11 as a gender non-conforming Latina in early 1960’s New York, she lived life as one of the most marginalized segments of society.

So you can imagine that she did not have an easy life.

Nor did the drag queens and trans-people who raised her and helped to keep her safe. But these are the people to whom we owe our movement. These are the people who said “Enough!” one night in June of 1969. And for the past 40 years, Pride events across the globe have commemorated the Riots at Stonewall. 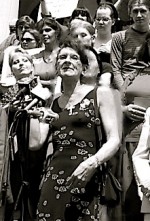 Trans people still find themselves fighting for acceptance, much less for equality.

So this year, on our 40th Anniversary, Atlanta Pride goes back to our roots. With Juxtaposed Center for Transformation and Transgender Individuals Living Their Truth (TILTT), Atlanta Pride is co-sponsoring the Sylvia Rivera Stonewall Community Brunch. The event focuses the LGBT community’s attention on the issues still faced by the most marginalized segments of our community in hopes of moving us all forward toward full equality and acceptance. 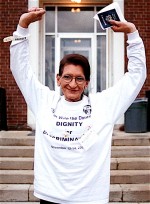 Pride will still be the open, honest, and vibrant celebration of the gains our diverse community has made over the last 40 years or so. But it will be in October, adjacent to National Coming Out Day. After all, the world doesn’t change if we don’t make ourselves known, and what better way to do that than with a Pride celebration?

The world has evolved since Sylvia and her sisters took the first step on the long road to equality. We’ve not reached the goal yet, and hopefully more change is to come.

For our part, Atlanta Pride is changing our approach this year. By cosponsoring the Sylvia Rivera Stonewall Community Brunch on the last weekend in June and moving Pride to coincide with National Coming Out Day, we feel we are honoring our history as a movement and remembering how far we have yet to go while simultaneously casting a hopeful eye to the future and the better times ahead.

I hope you will join us for both.

The Sylvia Rivera Community Brunch takes place Saturday, June 25 at 11:30 a.m. at Central Presbyterian Church. It is followed immediately across the street at the Georgia State Capitol by the Atlanta Pride’s “Be Visible, Make A Statement” Rally & Community Photo Shoot. Click for details on that mass art project.

Cain Williamson is chair of the Atlanta Pride Committee Board of Directors. He can be reached via {encode=”[email protected]” title=”e-mail”} or through the Pride office at 770-491-8633.