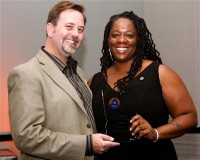 People who consistently keep LGBT causes at the fore get the much-deserved spotlight turned on them at Thursday’s annual Evening for Equality, the Georgia Equality cocktail reception, awards and silent auction that serves as a Who’s Who of Atlanta’s LGBT politicos.

A roomful of bigwigs could be your reward someday, too, if you live up to the likes of past honorees like Ronald Moore, now-state legislator Simone Bell (top photo, with GE Executive Director Jeff Graham), Allen Thornell and Cindy Abel. And when we say bigwigs, think of a gay or gay-friendly Georgia politician at the local, state and even national level, and they’re likely to be at the swanky rooftop venue Ventanas at the Hilton Garden Inn .

Speaking of starters, the evening kicks off with a cocktail VIP reception for sponsors, honorees and the host committee. The Equality Awards and Silent Auction follow. The whole shebang benefits Georgia Equality’s ongoing efforts for LGBT rights, often working against the tide from Atlanta’s political island of blue in a red state sea.

The event attracts an average of 200 people and is part of this year’s official slate of Stonewall Week events in conjunction with the Atlanta Pride Committee.

You can still buy tickets online now for $75 each that goes toward the cause.

This year’s honorees and their accomplishments range from longtime activists to pro-equality allies and worthy non-profit organizers. Here’s the list, including written comments from Georgia Equality’s Graham.

Ken Britt
Phillip Rush Community Builder Award
Ken currently serves as the Co-Chair of the National Board of the Human Rights Campaign, and as a Board Member of the Community Foundation for Greater Atlanta, and will be recognized for his untiring commitment to strengthening so many LGBT, HIV/AIDS and important community organizations in Atlanta.

Maru Gonzalez and Austin Lauferweiler
Champions for Equality Award
Gonzalez and Lauferweiler and other members of the Georgia Safe Schools Coalition are creating safe schools for LGBT students throughout the metro area and have successfully started conversations on developing comprehensive policies within the Cobb County School system.

State Rep. Mike Jacobs
Allen Thornell Political Advancement Award (new this year in the name of Georgia Equality’s past board chair and executive director, who died last year)
Jacobs has worked tirelessly to create the bipartisan support that is needed to pass legislation that advances the rights and protections for LGBT Georgians, including sponsoring this year’s successful effort to pass anti-bullying legislation.