Steven Daigle rides into Pride to get exposed 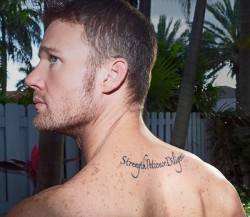 What’s it take to transition from a gay cowboy on reality TV to sex films for multiple studios? Steven Daigle knows and on Pride Saturday, you can ask him for yourself at Brushstrokes. It took Daigle (photo), prematurely booted from the 10th season of “Big Brother,” about 18 months to transition fully into gay sex films after leaving the CBS show. But once he, ahem, nailed his first film with porn legend Chi Chi LaRue – “Steven Daigle XXXposed” – he’s gone on to be “Stalked,” played with “Kings” and tried “Men at Play.” In other words, he’s been a big hit with several leading studios. Now, you can see him for yourself – and even buy a pair of Frank Dandy underwear right from his star-powered package – during his appearance at Brushstrokes Pleasures on Oct. 9. That’s right smack in the middle of Atlanta Pride and really, don’t you need a little adult-themed fun to mix with the parade, nightlife, entertainment and park time you’ll be enjoying? Buying the briefs from Daigle’s booty is for a good cause – not just your libido. Proceeds benefit drag personality Mary Edith Pitts’ never-ending crusade to raise funds for HIV charities. For a buck, you can also get your photo snapped with Daigle with those proceeds going to charity, too. Don’t worry – Daigle comes equipped with lots of his DVDs and other toys that bear his likeness. So you can snap up some of those and have them autographed by the cowboy himself. You can also catch a peek at Daigle on Oct. 7 during his appearance at Indulge. It's a special Pride kick-off event for the weekly night of cocktails and conversation at the W Hotel Midtown.