Steven Daigle in town for his Atlanta twofer 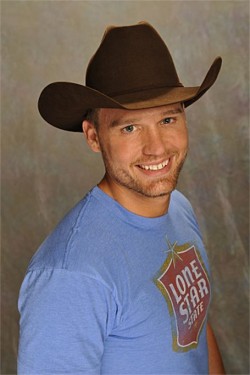 Gay cowboy turned “Big Brother” turned adult film star Steven Daigle has autographed just about everything – underwear, DVDs and toys molded, um, in his likeness. On Saturday, you’ll have the chance to see what else he might sign when he hits Atlanta for a charity appearance.

The fit, 37-year-old contestant from the 10th season of “Big Brother” hits Brushstrokes Pleasures on Saturday to help raise money for the HIV charities that drag personality Mary Edith Pitts supports with her never-ending fundraising crusade. For at least $1, you can have your pic snapped with Daigle, and he’ll even be signing merchandise like the Frank Dandy undies he’ll be sporting. (Joining him will be Jake Steel and Jason Sparks.)

For a preview of just how well the former systems analyst for a global engineering consulting firm packs his briefs, you can catch Daigle Thursday during a celeb-packed edition of Indulge at the W Hotel Midtown.

At Brushstrokes, you’ll be signing underwear, DVDs and other toys. What’s the oddest thing a fan has asked you to sign?
I signed and sold an old pair of flip flops.

You recently shot a straight scene with two women. What was that like? First time with a woman?
I have been with women when I was younger. This was my first time with two women. It was fun. I am a performer, and this was a chance to show that I can perform in any situation. Straight guys perform with guys all the time. I wanted to prove it is the same thing for a gay man with women. I mean, I’m not always attracted to the men. I did it to prove I can perform in any situation.

Does all the sex on screen take the fun out of your personal sex life?
I was never a big fan of sex in my personal life anyway, [so] it hasn’t changed that much. I’m more of a fan of intimacy and emotional bonding with a man. I enjoy sex when it is done with a boyfriend and as a way to make our relationship complete.

Any tips for our readers on sexing up their lives?
Have less random sex and focus more on being intimate with one person. Learn to recognize what really turns your partner on and remember it. Don’t be afraid to explore your fantasies and share them. Everyone has different “turn ons” — don’t be afraid to vocalize them.