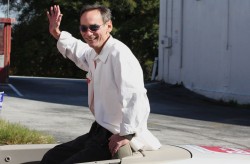 To the victor belong the spoils and to the loser? They get snark. Steve Brodie (photo), the gay man who nearly dethroned lesbian incumbent Anne Fauver in 2005, placed fourth this time, leaving some scratching their heads in disbelief.

Brodie was one of three gay man and six overall candidates with their eyes on the District 6 prize. Brodie brought his 2005 experience to this race and, well, did poorly in his second bid for the Atlanta City Council.

How poorly? In 2005, he snared 2,859 votes and though that was five less than Fauver, who won a second term, it was more than twice the 1,226 votes he received Tuesday.

If Brodie had repeated his 2005 performance this time, he would be in a runoff with winner Alex Wan, one of the the gay candidates in the race. Wan took first place with 2,862 votes. Instead, Liz Coyle’s 2.030 votes were enough to put her in the Dec. 1 runoff with Wan.

So while Wan enjoys the spoils — if you can call four more weeks of campaigning the spoils — Creative Loafing offers this explanation for Brodie, otherwise known as the aforementioned snark:

I’ve heard surprise that Steve Brodie couldn’t manage better than a weak fourth-place finish in the six-person District 6 Council race, considering he’d come within five votes of beating incumbent Anne Fauver four years earlier. But, as a local political operative told me, folks had supported Brodie when the only alternative was the wildly unpopular Fauver. This time, however, when there were other, more appealing candidates, Brodie quickly became an also-ran.

Apparently, that chub-chasing campaign video didn’t help. The upside is that Brodie can walk away from the election knowing he’s not Miguel Gallegos, the gay, unemployed, nearly homeless Buddhist who nabbed a whopping 139 votes. That placed him third among the gay candidates and dead last overall, except for “Write-In,” who received 8 votes.

Bet those labor hacks at the Atlanta-North Georgia Labor Council AFL-CIO are pleased their endorsement process led them to Gallegos. Apparently, the threats of a “liable” lawsuit didn’t help Gallegos as much as he thought it might.