Barrett (photo) grew up in the Birmingham area and graduated from Corner High School and the University of Alabama at Birmingham. His husband, Tim Garrett (with Barrett, second photo), asked Atlanta Pride Executive Director JP Sheffield to announce his death and spread the word.

Within an hour of the announcement, Barrett’s Facebook page was flooded with messages of grief proclaiming the loss of a friend with a big heart and commitment to community causes. 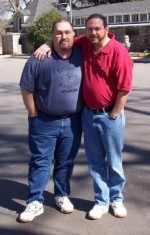 As Pride’s operations chair for nearly two decades—half of the history of Atlanta Pride itself—Barrett could be found manning “mission control” at each Atlanta Pride festival. The operations committee is responsible for all of the festival’s equipment and triages all logistical needs, security, personnel, market, first aid and most any other requests.

“In short, he was personally responsible for every other committee’s needs, and the operations center was ground zero for any issue during the festival,” Sheffield says. “Power outages, chairs needed, anything at all, that call went to Greg. It was a really, really tough job.

“I can’t even think abut how we’re going to make due yet,” he says. “It’s not just about losing someone who did a good job, but he had an institutional history of what worked and what didn’t work. You can’t replace that kind of knowledge. You can’t have another Greg.”

There were also things Barrett did throughout the year that weren’t part of his volunteer position, Sheffield says.

“Greg was a serious person sometimes because he was so focused on getting the job done, but he was a big old teddy bear,” he says. “He had extraordinary moments of showing joy over the smallest thing. Some of us get sick of rainbows, for example, but every single time Greg saw one, he got excited. Any time I was overwhelmed, had too much to do, Greg was there. Any event Pride did in addition to the festivals, Greg was there.”

“He understood the meaning of Pride and the importance of carrying that message wherever he could,” Sheffield says.

Barrett’s legacy–with Pride, as well as volunteer coordinator for Atlanta AIDS Walk and any volunteer job needed with the Atlanta Gay Men’s Chorus–rests with all of the other volunteers he represents, Sheffield says.

“I hope people hear of Greg and think of all those people who do it with a smile on their face expecting nothing in return.”

Services for Greg Barrett will be held Monday, June 7 at 3 p.m. at Christ Covenant MCC, 109 Hibernia Ave., Decatur, GA 30030. In lieu of flowers, Garrett has asked donations be made in Barrett’s memory to the Atlanta Pride Committee and/or the Atlanta Gay Men’s Chorus.