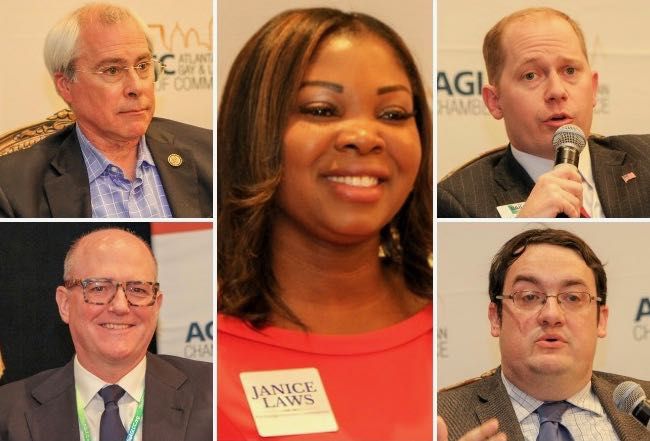 About 150 people attended Rise of the Rainbow Economy, an annual LGBT business summit hosted by the Atlanta Gay & Lesbian Chamber of Commerce. Stacey Abrams, the Democratic nominee for governor, also addressed the crowd before the event wrapped up with AGLCC's Fourth Friday Networking Night.

It was a notable moment for Barrow, who during a 2014 bid for reelection to Congress refused to co-sponsor the Employment Non-Discrimination Act. The legislation would have prohibited employment discrimination based on sexual orientation or gender identity. Barrow was one of only eight Democrats in the U.S. House to refuse to sponsor the bill.

While the five-time Congressman did vote to repeal “Don’t Ask, Don’t Tell” and voted for the Matthew Shepard Hate Crimes Act, Barrow also voted to uphold the Defense of Marriage Act, leading him to often score on par with his Republican counterparts in Georgia on HRC’s Congressional Scorecard. He lost that election in 2014.

“Religious freedom” bills came up again during an answer from Bailey on how he could support the state’s LGBTQ community in his role as attorney general. The former Fulton County Assistant District Attorney explained how the position of attorney general in Georgia is a more independent and powerful one than in other states. And he has a plan if a “religious freedom” bill becomes law and is later challenged in court.

“The great thing about this position and me is that I’ll just refuse to defend it,” Bailey said. “And not only will I refuse to defend it, I’ll instruct my assistant attorneys general to file amicus briefs on behalf of the plaintiffs that are challenging the constitutionality of the legislation.”

Bailey (second photo) also plans to weigh in on those and any other similar laws should he win in November.

Abrams later singled Bailey out during a post-event photo-op, saying he would be “an extraordinary attorney general who can sue the Trump administration every Thursday.”

Rae referenced California’s Insurer Supplier Diversity Survey in a question to Laws. The survey requires the state’s insurance companies to report their procurement efforts with businesses owned by minorities, women, disabled veterans and LGBTQ people. It’s a model that has since spread to several other states.

“I would absolutely be willing to participate in innovative ideas that are already happening. So, that would be something that I would be willing to participate in,” Laws said. “Also we would start our own initiatives here in Georgia to assess diversity, what are some of the gaps that we’re experiencing here in our state to … take care of our insurance needs and make sure that all communities, including the LGBT community, are taken care of.”

Keatley said that as Labor Commissioner, he would form LGBTQ-inclusive advisory panels and make sure people are aware of a hotline they can use to report if they’ve been discriminated against because of their sexual orientation or gender identity.

He also said diversity would be a factor in filling positions within the agency.

“The fish stinks from the head,” Keatley said. “So if we can fix things at the top of the office and set the example, then things should eventually follow.”

Abrams (third photo) was making her second appearance at an AGLCC event during her campaign, after attending the organization's Fourth Friday Networking Night in January.

“These are communities that deserve investment because they serve populations that are too often left out of the economic conversation,” she said.

Abrams also said that passing comprehensive civil rights legislation will require incentives for GOP lawmakers to support it, and that the effort could take an entire two-year legislative session to make it happen.

Abrams’ appearance Friday followed her showcase speech at Georgia Equality’s Evening for Equality gala on June 16. On Saturday, she marched and gave a speech at the Augusta Pride festival.