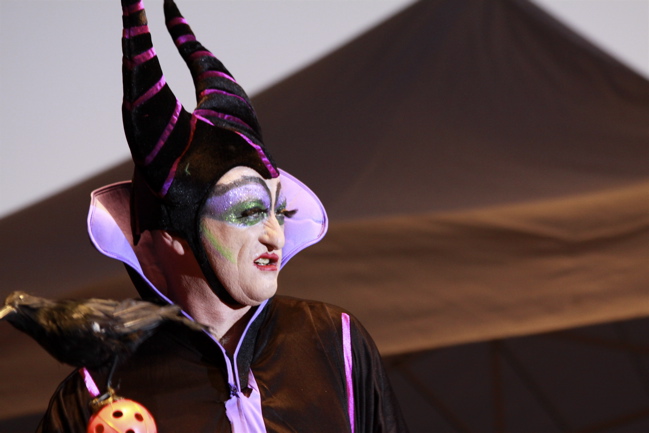 As the sun went down on another Pride Sunday, the annual Starlight Cabaret brought the best local drag acts to the Atlanta Pride stage to close out the festival in the park with end-on-end showstoppers.

Emcee duties came round-robin style as Pride Entertainment co-chairs Buck Cooke and Tony Kearney (aka the ghost of Wild Cherry Sucret) traded off duties on the mic with the Lady Shabazz and DJ Bill Berdeaux. All of the above also performed for the enthusiastic crowd.

From the fierceness that is Shabazz to the baudiness that is Mary Edith Pitts, from the titty-bounce of Heather Daniels to the hyper-masculine crotch-grabbing of drag kings to old-school burlesque by Vagina Jenkins and so much more, the show gave us a taste of just about every dish on Atlanta’s drag buffet.

Throw in the East Point Possums as Disney’s best female villains with the Court of Kings as the Village People, and it was another Starlight Cabaret for the record books.

The show was also billed as the farewell performance of Alexandria Martin, who delighted the audience in an otherworldly acid yellow getup, reminding us that her creativity knows no bounds. She recently left her co-hosting duties at PALS Bingo as well.

Whether “farewell” means retirement from drag, an exit from Atlanta, or just Martin’s last Starlight Cabaret wasn’t clear. We’ll investigate and keep you posted. In the meantime, enjoy our photo gallery of photos from the event.