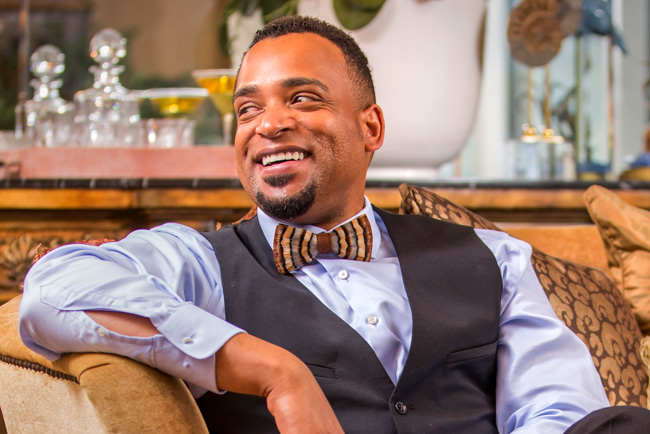 Interior decorator Curtis Slade said he was “kind of floored” to get the job on the newly-dubbed “Jenn & Friends” morning show helmed by Jenn Hobby. Star 94.1 fired Hobby's co-host Jeff Dauler on May 9, according to the AJC. Longtime Atlanta radio personality Mark Owens is the other new cast member of “Jenn & Friends.”

“I was really excited,” Slade (photo) told Project Q Atlanta. “More than that I was like, I have to pack up 21 years of my life in a short amount of time. It’s really exciting and I’m looking forward to playing this role.”

Slade moved from Myrtle Beach to Atlanta on Wednesday and will start at the show on Thursday.

This isn’t Slade’s first foray into radio. He hosted a weekly segment on “The Ron Show” on iHeartRadio called “Better Call Curtis” in 2008.

“People would call me for advice on love, relationships, you name it,” he said. “It was realistic advice, but I made it fun and entertaining.”

“The Ron Show” host Ron Roberts is now program director at Star 94.1. Roberts offered the “Jenn & Friends” job to Slade on May 7, according to Roberts.

Slade came to Atlanta after that to meet the show’s cast members and staff.

“I was there for a few days and we all hung out and saw how our personalities worked and were telling stories about our lives,” he said. “I think it’s going to be a perfect match with all the personalities we have. So it should be fun.”

Slade said his goal on the show is “to be authentically me.”

“I want your commute to and from work to be fun-filled and exciting,” he said. “I have so many stories that are all real stories and you may think are false when you hear them, but they’re real. It’s just pure entertainment.”

Slade said Atlanta was “one of [his] favorite places to visit” and he enjoys hitting up eateries Pittypat’s Porch, Marlow’s Tavern and Ted’s Montana Grill.

He’s looking forward to representing LGBTQ Atlanta on the show.

“Atlanta has a huge gay population and, once again, my goal is to be who I am, to be myself and not anyone else and I want to draw in a crowd of those listeners,” he said. “I want to have a connection with those people.”

Dauler's firing at Star 94.1 was part of a purge of the station's lineup that included the ouster afternoon host Mike Marino. Mid-day host Heather Branch retired from radio on May 10.

Melissa Carter was Atlanta’s first openly LGBTQ radio personality. The former “The Bert Show” cast member left the show in 2011 and later had stints at All News 106.7 and B98.5. She now hosts a weekly podcast called “She Persisted” on Progressive Voices Radio and writes a column for Georgia Voice.

V-103 dropped popular Atlanta drag queen Miss Sophia from its “Frank & Wanda in the Morning” show in January. She took over the weekday afternoon drive shift on WERUradio in March. WERU is an Atlanta-based online station geared toward LGBTQ listeners.