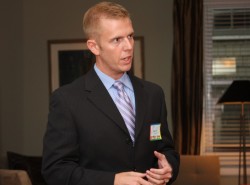 The races for mayor and the District 6 post on the Atlanta City Council may be grabbing most of the political bandwidth, but there is an interesting school board race brewing.

That’s the one for the District 3 seat on the Atlanta Board of Education. Gay teacher Charlie Stadtlander (photo) hopes to unseat incumbent Cecily Harsch-Kinnane and become the only openly gay member of the school board. If elected, Stadtlander wants to focus on bullying in schools and fiscal accountability.

He jumped into the race July 15 and formally kicked it off two weeks later with a Midtown fundraiser that attracted some longtime LGBT activists.

And Thursday night, you get a chance to hear Stadtlander and Harsch-Kinnane — along with scores of candidates in other school board races — in a League of Women Voters forum. It’s being billed as the only scheduled city-wide session for school board candidates.

The event runs 6 p.m. to 8 p.m. at Benjamin E. Mays High School, with an opportunity to mingle with candidates beginning at 5:30 p.m.

Stadtlander is one of a dozen LGBT candidates running this election cycle: